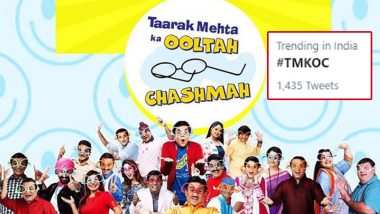 Its July 22 and Taarak Mehta Ka Ooltah Chashmah fans are the happiest, for their much loved SAB TV sitcom began telecasting first episodes. The show based on writer Taarak Mehta's column Duniya Ne Undha Chashma aired its first episode on July 28, 2008, and has aired fresh episodes until the COVID-19 lockdown forced the shutdown of all television show shoots. The show that has amassed a loyal fan following ever since its first episode aired was immensely missed by fans during the lockdown and they all had to make do with repeat telecast of the show. Taarak Mehta Ka Ooltah Chashmah Team Begins Shoot; Fresh Set of Face Mask, Shield and Gloves Provided At Entry (View Pics).

However, the team began shooting on July 10, 2020, exactly 115 days after they halted shooting for their show and aired their first post-lockdown episode on July 22. Quick to commemorate and celebrate the occasion, TMKOC fans trended the show on Twitter. Taarak Mehta Ka Ooltah Chashmah Actor Dilip Joshi On Resuming Shoots 'At The End Of The Day You Are Mentally Drained'.

TMKOC Fans Right Now If They COULD:

Will Popatlal Get Married Atleast Now?

#TMKOC Is Back With New Episode...

In an earlier interview, Dilip Joshi, who plays Jethalal on the show detailed the precautionary measures that show's producer Asit Kumar Modi had taken to ensure the cast and crew members' safety. He had revealed, "Asit Bhai ensures that all the SOPs are strictly followed on the set. He has gone out of the way to make shooting safe for us, including a sanitisation tunnel, doctors on set to monitor temperature and oxygen levels, a UV Ray machine to sanitise jewellery and other equipment.". Did you catch the first post-lockdown episode of the comedy show?

(The above story first appeared on LatestLY on Jul 22, 2020 11:09 PM IST. For more news and updates on politics, world, sports, entertainment and lifestyle, log on to our website latestly.com).