Sources said that the NDA is likely to name the fromer Punjab Chief Minister as its candidate for the Vice President's post. 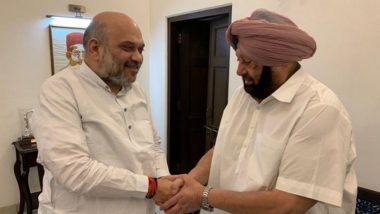 New Delhi, July 2: Former Punjab Chief Minister Amarinder Singh is in the race to become the next Vice President of India.

Sources said that the NDA is likely to name the former Punjab Chief Minister as its candidate for the Vice President's post.

"Several names are doing the rounds of which the prominent ones are Amarinder Singh, Madhya Pradesh Chief Minister Shivraj Singh Chouhan and Minority Affairs Minister Mukhtar Abbas Naqvi. The vice presidential candidate will be finalised by the top BJP leadership and the Parliamentary Board," said a BJP insider. Prophet Muhammad Row: Kolkata Police Issues Lookout Notice Against Nupur Sharma

Singh is currently in London for a back surgery. However, a close aide of the former Punjab Chief Minister said that no confirmation has been received yet proposing Singh's name as NDA's nominee for the Vice President's post.

There is also a buzz in BJP circles that incumbent Vice President M. Venkaiah Naidu could be given a second term, but as of now there have been no official deliberations on this.

Singh left the Congress and formed the Punjab Lok Congress after he was removed from the post of Punjab Chief Minister last year. He contested the recent Punjab Assembly polls in alliance with the BJP.

The BJP-led NDA candidate is all set to become the next Vice President as the voters are the Members of Parliament and the BJP has a huge mandate in the Lok Sabha while in the Rajya Sabha, it is the single-largest party having more than 90 seats.

In the last election in 2017, the Opposition had fielded Gopalkrishna Gandhi but he lost to Naidu. Naidu polled 516 votes while Gandhi could manage only 244 votes.

The Vice Presidential election is scheduled to be held on August 6.

(The above story first appeared on LatestLY on Jul 02, 2022 06:44 PM IST. For more news and updates on politics, world, sports, entertainment and lifestyle, log on to our website latestly.com).