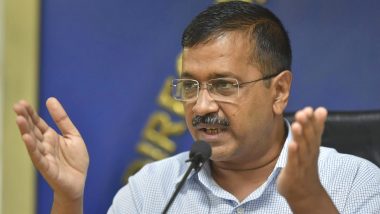 As per the Chief Minister's Office (CMO), Kejriwal discussed in detail the current status of the power supply in Delhi and has directed the officials to identify areas in need of transformers for improved power supply and insulate or make high-tension wires underground for the safety of the people.  NCT Amendment Bill 2021: All About The Bill That Gives More Powers to Centre in Delhi; Here's What Opposition Leaders Are Saying

Deliberating on the current power situation in Delhi, Kejriwal said, "Every year, Delhi goes through an average 4-5 per cent increased demand for power due to increase in consumption because of new customers and increased prosperity every year. We have successfully been able to meet the growing demand until now and are supplying 24x7 power to all the residents of Delhi."

"Had a review meeting with the officials of the electricity department and power distribution companies. Discussed in detail the current status of power supply in Delhi amidst the peak demand for electricity in the capital," Kejriwal tweeted after the meeting.

On Friday, Delhi had recorded a peak power demand of 7,323 mega watts (MW), the highest since 2019. However, the officials in the power department of Delhi government claimed increased power supply could be managed without any power cuts.

As the summer continued to its peak, Delhi recorded peak power demand of 6,921 MW on Wednesday and 7,026 MW on Thursday.

Friday was also the second time in two years that peak power demand in Delhi crossed the 7,000-mark.

(The above story first appeared on LatestLY on Jul 04, 2021 08:52 AM IST. For more news and updates on politics, world, sports, entertainment and lifestyle, log on to our website latestly.com).