NCT Amendment Bill 2021: All About The Bill That Gives More Powers to Centre in Delhi; Here's What Opposition Leaders Are Saying

The National Capital Territory (NCT) Bill gives discretionary powers to the L-G even in matters where the Legislative Assembly of Delhi is empowered to make laws. The Bill has drawn flak from the AAP government in Delhi and also from several opposition parties. 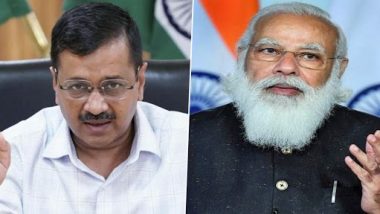 New Delhi, March 16: The Centre on Monday tabled the new Bill in Lok Sabha, which is an amendment to the Government of National Capital Territory (NCT) of Delhi Act, 1991. The National Capital Territory (NCT) Bill gives discretionary powers to the L-G even in matters where the Legislative Assembly of Delhi is empowered to make laws. It seeks to better define the role of the Council of Ministers and the L-G in Delhi. The introduction of the Bill in the lower house of the Parliament has drawn flak from the AAP government and also from several opposition parties.

As a mark of protest, AAP members staged a protest in front of the Gandhi Statue in Parliament premises on Tuesday. The tussle between the Centre and AAP government in Delhi revived as the Centre introduced the bill in parliament. After the Centre's decision, Delhi Chief Minister Arvind Kejriwal and Deputy Chief Minister Manish Siosida accused Modi of an attempt to run the Delhi government from the back door, giving more power to the LG. Taking to Twitter, Kejriwal said the Bill, which “seeks to drastically curtail powers of the elected government”, is “against” the Supreme Court judgment.

What is the NCT Bill

The bill that was introduced by Union Minister of State for Home G Kishan Reddy in Lok Sabha makes it mandatory for the Delhi government to take the opinion of the lieutenant governor (LG) before any executive action in the national capital.

The tussle between LG and Delhi Govt:

Several opposition parties have come in favour of the Arvind Kejriwal government over the NCT Bill, terming it 'unconstitutional'. The Congress has termed the bill as retrograde, anti-democratic and an insult to the people of Delhi. Taking to Twitter on Tuesday, senior Congress leader P. Chidambaram said: "The demand is for enlarged legislative powers to Delhi and the will of the people. On the contrary, the proposed amendments will make the Delhi government less than a municipality and rob the people of any kind of representative government.

Omar Abdullah, National Conference leader and former Jammu and Kashmir CM extended his support to the Delhi government. "In spite of AAP's support for the dismemberment & downgrading of J&K in 2019, we still condemn this assault on the powers of the elected government of Delhi. Delhi deserves to be a full state with all powers exercised by the elected government & not a nominated LG," Abdullah tweeted.

(The above story first appeared on LatestLY on Mar 16, 2021 04:59 PM IST. For more news and updates on politics, world, sports, entertainment and lifestyle, log on to our website latestly.com).