A major fire broke out at a shoe factory located at Udyog Nagar in Delhi. 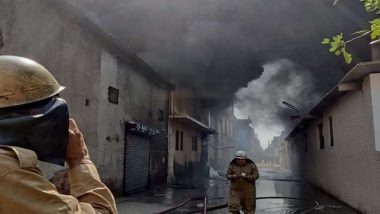 New Delhi, June 21: A major fire broke out at a shoe factory located at Udyog Nagar in Delhi.

A fire official told IANS that a total of 36 fire tenders have been rushed to the spot and the efforts to control the fire were underway. Greater Noida: Fire Breaks Out in a Chemical Factory in Surajpur Industrial Area; No Casualty Reported

He further informed that fire has spread to adjoining buildings also and people have gathered in large number.

The fire-fighting operations are underway and the cause of the fire is not known yet.

(The above story first appeared on LatestLY on Jun 21, 2021 01:01 PM IST. For more news and updates on politics, world, sports, entertainment and lifestyle, log on to our website latestly.com).