With the rains continuing in several parts of the national capital on Monday, reports regarding waterlogging, traffic snarls, overflow of water in some unplanned residential colonies have started to emerge. 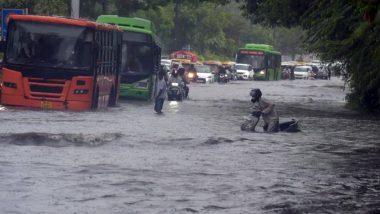 New Delhi, July 19: With the rains continuing in several parts of the national capital on Monday, reports regarding waterlogging, traffic snarls, overflow of water in some unplanned residential colonies have started to emerge.

The road from Sangam Vihar to Ambedkar Nagar was overflowing with rain water which obstructed vehicular movement.

According to the Delhi Traffic Police, PWD work was underway to clear congestio after a DTC bus broke down at Kanjhawala Chowk.

Also, there have been reports of some roads caving in due to the continuous rain.

Delhi's civic authorities said waterlogging was reported in several areas and departments have swung into action.

Data collected from North Delhi Municipal Corporation suggested that waterlogging was reported at several places and water is being discharged from roads using temporary pumps.

East and South Delhi Municipal Corporations said reports are being collected and will be shared by the evening.

"In view of the monsoon, regarding the drainage system of Delhi, held a review meeting was held with PWD, MCD, DJB, I & FC under the chairmanship of Lt Governor. A system like Minto Road will also be built at other points of Delhi. Regular cleaning of drains and sewers. Will make a world class drainage system in Delhi," Kejriwal tweeted after the meeting.

The Met Department has predicted heavy rain in Delhi, with light to moderate showers, giving respite from high humidity in the national capital.

According to the Met, intense convection over several parts of North, North West as well as East and North East India are responsible for the heavy rainfall.

(The above story first appeared on LatestLY on Jul 19, 2021 03:16 PM IST. For more news and updates on politics, world, sports, entertainment and lifestyle, log on to our website latestly.com).