West Bengal Board Exams for Class 10 and 12 Will Be Held in June 2021, Says Education Minister 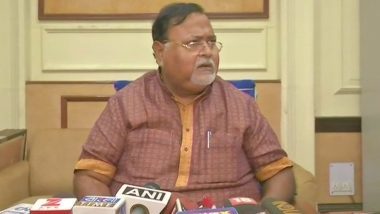 Kolkata, December 23: West Bengal Board of Secondary Education (WBBSE) Madhyamik (class 10) and Uchha Madhyamik (class 12) board exams will be held in June 2021, state Education Minister Partha Chatterjee announced on Wednesday. Class 10 and 12 examinations will be held one after another. Both Madhyamik Pariksha and West Bengal Council of Higher Secondary Education (WBCHSE) had proposed to the government to conduct the exams in June. No Plan to Change Decision About Not Opening Schools: Bengal Minister.

"West Bengal Council of Higher Secondary Education and the West Bengal Board of Secondary Education have informed us that they want to hold final exams in June 2021. We have asked them to decide the exam schedule and announce accordingly," Partha Chatterjee said. Earlier, students of class 6 to 9 were promoted to the next class without any annual examination in schools affiliated to WBBSE. Delhi Nursery Admissions 2021-22 Update: AAP Government Mulls Scrapping Admission as Schools Unlikely to Open Before July, Says Report.

Every year the CBSE conducts examinations for classes 10 and 12 starting in February. The CBSE officials have ruled out the possibility of conducting exams online in 2021 and said the students will be writing the exams with pen and paper as in the past.

(The above story first appeared on LatestLY on Dec 23, 2020 04:53 PM IST. For more news and updates on politics, world, sports, entertainment and lifestyle, log on to our website latestly.com).