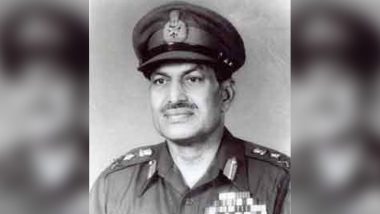 He was commissioned into the Indian Army as a second lieutenant in the 2nd battalion of the Mahar Regiment on August 9, 1942. As a second lieutenant, Rao served in Burma, North-West Frontier and Baluchistan during the Second World War. He served both in east and west Punjab in 1947, at the time of the partition. General Pran Nath Thapar 114th Birth Anniversary: Here Are Interesting Facts About Fourth Chief of Army Staff.

Here Are Some Interesting Facts About General KV Krishna Rao:

Gen Rao died on January 30, 2016, in New Delhi at the age of 93. Gen Krishna Rao is credited with coming up with a unique military doctrine - "Cold Start" - for swift, immediate, multiple strikes to counter and contain the enemy's aggression, in the interest of the safety of the nation, without losing time and strategic advantage due to possible delays in political decisions.

(The above story first appeared on LatestLY on Jul 16, 2020 08:45 AM IST. For more news and updates on politics, world, sports, entertainment and lifestyle, log on to our website latestly.com).