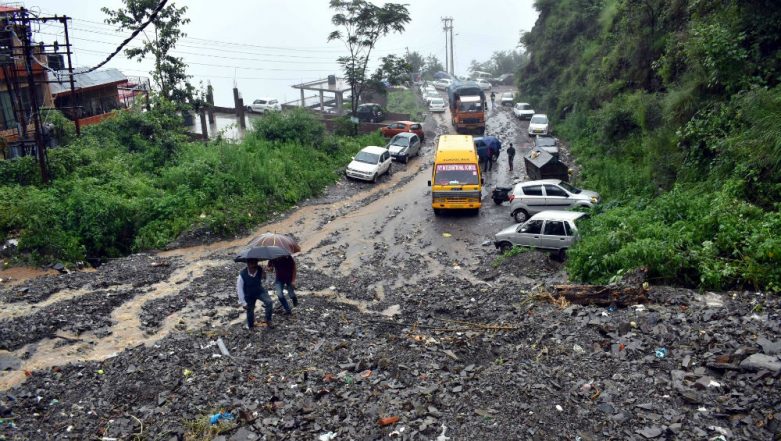 Shimla, Aug 13: Heavy rains in Himachal Pradesh claimed 16 lives, including four of a family, while hundreds of people were stranded across the state after incessant rains triggered landslides, snapping road links, officials said on Monday. A government advisory advised people to avoid travel as the weather officials warned of heavy rains in the state till Tuesday and thereafter on August 16 and 17. Four members of a family were killed in a landslide in Kandaghat subdivision in Solan district. A boy was washed away in the swollen Kaushalya river near Parwanoo in the district. A total of eight persons lost their lives in rain-related incidents in the district.

Landslides led to the death of three persons in Mandi district, while road traffic was disrupted for hours on the Chandigarh-Shimla, Shimla-Nahan, Chamba-Pathankot and Mandi-Pathankot highways. Additional Chief Secretary Manisha Nanda said that 923 roads were closed due to landslides, including six National Highways, and that men and machinery had been pressed into service to open these roads to traffic as soon as possible.

Presiding over a review meeting here on the damage caused by rains, Chief Secretary Vineet Chawdhry said the state had released Rs 96.50 crore for relief and rescue operations. As a precautionary measure, all schools and educational institutes in the state will remain closed on Tuesday too.

The water level in the Beas river rose dramatically, touching the Chandigarh-Manali National Highway 21 near the Hanogi temple. Traffic on the stretch was suspended owing to the development. All trains on the Kalka-Shimla route were cancelled due to landslips on the tracks.

After heavy overnight rains, most roads in Himachal interiors remained closed to traffic on Monday, leaving hundreds of commuters stranded. Vehicular movement in Kinnaur district was suspended due to landslides at several places on the Hindustan-Tibet Road. An official said traffic in higher reaches of Kinnaur, Shimla, Chamba, Mandi, Kullu and Sirmaur districts was the worst affected and efforts were on to restore it.

Sujanpur Tira town in Hamirpur district recorded the highest rainfall in the state at 307 mm, while it was 300 mm in Arki town in Solan district and 239 mm in Paonta Sahib in Sirmaur district. Baijnath town in Kangra district recorded 235 mm in the past 24 hours, while Palampur town recorded 212 mm. It was 142 mm in Dharamsala town, 117 mm in Kasauli, 129 mm in Solan town and 72 mm in Dalhousie.

State capital Shimla recorded 172 mm rainfall within 24 hours in this month - the highest precipitation since 2011, a meteorological official said. Bhakra Beas Management Board (BBMB) authorities released excess water from the Pandoh dam into the Beas river as heavy rain abnormally increased the water level in the reservoir, the official said.

The water level in the major rivers of the state - the Satluj, Beas and Yamuna - which enter the neighbouring states of Punjab and Haryana has also increased, a government official said. "Continuous heavy rains have increased the water level in the Beas river and its tributaries, including the Parvati and the Tirthan," the official added.