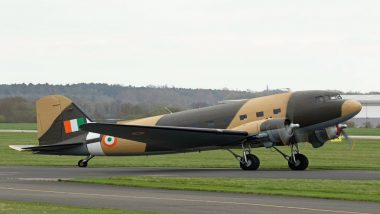 Jamnagar, April 26: The Indian Air Force welcomes home, the 1940’s vintage aircraft, the Dakota DC-3, VP905. The Aircraft got airborne from Muscat International Airport, Oman and touched down at Jamnagar Air Force Station (AFS), Gujarat at 4:30 PM on Wednesday. The aircraft was received with a lot of splendour at AFS Jamnagar.

To honour the old warhorse in its new residence, induction ceremony is scheduled on 04 May 18 at Air Force Station Hindan. It will bear the tail number VP 905, the same one which the first such Dakota which transported troops to Srinagar on October 27, 1947.  The Dakota DC-3 is named Parashurama.

#Dakotahomebound : The Dakota #VP905 carried out an overshoot & familiarised with the airfield, before touching down on the home ground. To honour the old war horse in its new residence, induction ceremony is scheduled on 04 May 18 at Air Force Station Hindan. pic.twitter.com/ETHEx0kxmN

A Dakota DC-3 aircraft inducted into the Vintage Aircraft Fleet of the Indian Air Force (IAF). The vintage fleet was raised in Palam in 1988. A large fleet of Dakota DC-3 served in the IAF till 1988. It was one of the most versatile transport aircraft of its time. The first Dakota aircraft transferred the 1st Sikh Regiment to Srinagar during the Kashmir conflict between India and Pakistan in 1947 just after India’s independence. It is World War II-era aircraft, which was built in 1944. It also served in the United Kingdom’s (UK) Royal Air Force.

Under the watchful eyes of @indiannavy P8i pic.twitter.com/e4bUbDCUvi

The particular aircraft is recovered from the scarp from the UK by Rajya Sabha Member of Parliament (MP) Rajeev Chandrashekhar. He gifted this aircraft to the IAF. The Chief of Air Staff Air Chief Marshal B.S Dhanoa had ceremonially accepted the aircraft into the IAF from Chandrasekhar in February this year.

The crew is seen posing with the Dakota DC-3 along with Air Force officials and Rajeev Chandrasekhar.

#DakotaHomebound : The #Dakota #VP905 aircraft was received with lot of splendour at AFS Jamnagar, today. The crew is seen posing with the beautiful machine along with the Commander-in-chief SWAC, team Jamnagar & Mr Rajeev Chandrasekhar MP Rajya Sabha. pic.twitter.com/6Qm0EjwwhZ

(The above story first appeared on LatestLY on Apr 26, 2018 09:17 AM IST. For more news and updates on politics, world, sports, entertainment and lifestyle, log on to our website latestly.com).