Driving Licence, RC Presented, Other Car Papers Through DigiLocker or MParivahan Platforms Must be Accepted: Centre to States

States have been asked to accept driving licence, registration certificate or other documents in 'electronic form' presented through DigiLocker or mParivahan platforms, the government said on Thursday. 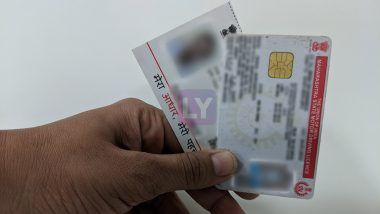 New Delhi, August 10: States have been asked to accept driving licence, registration certificate or other documents in 'electronic form' presented through DigiLocker or mParivahan platforms, the government said on Thursday. It also said that impounding of documents will be reflected electronically through 'eChallan' system. The Indian Railways also accepts soft or digital copy of Aadhaar and driving licence from DigiLocker as valid proofs of identity of a passenger.

"The Ministry of Road Transport and Highways (MoRTH) has issued an advisory to states to accept Driving Licence, Registration Certificate or other documents in 'electronic form' presented through DigiLocker or mParivahan platform as valid under the Motor Vehicles Act, 1988 and treat them at par with the certificates issued by the transport authorities," according to the ministry's statement.

This is in response to a number of grievances and RTI applications received in the ministry where citizens have raised the issue that the documents available in DigiLocker or the mParivahan app are not considered valid by the traffic police or the motor vehicles department, when asked to produce.

"The advisory clarifies that the DigiLocker platform of the Ministry of Electronics and Information Technology and the mParivahan mobile app of the Road Transport and Highways Ministry has the facility to pull a citizen's driving licence or the registration certificate or any other certificate in an electronic form," the statement said.

These electronic records available on DigiLocker or mParivahan are deemed to be legally recognised at par with the original documents as per the provisions of the Information Technology Act, 2000.

As per the provisions of the Motor Vehicles Act 1988, and the Central Motor Vehicles Rules 1989, the owner/driver has to produce the documents -- licence or certificate of registration etc to the authority on demand.

The advisory further said that the data related to the insurance of new vehicles and renewal of insurance of vehicles is also being uploaded by the Insurance Information Board (IIB) on the VAHAN database on a daily basis now and the same is reflected on the mParivahan/eChallan app of the ministry.

"If the vehicle registration details on the mParivahan/eChallan app contain the details of the policy which is in force, then the requirement of a physical copy of the insurance certificate is also not to be enforced," it said.

Regarding cases of offence when there is a requirement of the documents to be impounded, the enforcement agencies can have such impounding reflected in the VAHAN/SARATHI database electronically through the eChallan system.

"There would be no requirement of physical seizure of such documents. This IT based online verification of certificates is expected to help the enforcement authority in ensuring the genuineness of the details which further would result in better compliance and effective monitoring," it said.

States using any such online enforcement solution through alternative database have been asked to transfer the relevant information electronically through web service of VAHAN/SARATHI database.