Matt LeBlanc had a really interesting list of work before FRIENDS happened and things changed for him overnight. On his birthday today, let's look back at a time when Matt Leblanc still hadn't become Joey, 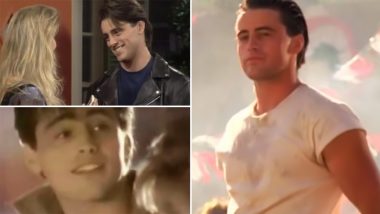 Matt LeBlanc, the adorable and admirable Joey from FRIENDS. Often it happens with famous people that fans don't remember everything they did before they become so popular. Every actor on the FRIENDS sitcom has a rich past as they have appeared on-screen in several shows or commercials. So did Matt. In fact, he had some really interesting list of work before the sitcom happened and things changed for him overnight. Martha Kaufman, the writer-creator of FRIENDS, had said that LeBlanc had just $10 in his pocket when he auditioned for Joey. Matt LeBlanc Birthday: Iconic Quotes Of Joey Tribbiani From Friends That Are Sure To Crack You Up (View Pics)

On his birthday today, let's look back at a time when Matt Leblanc still hadn't met Joey, the dimwitted yet lovable guy everyone wanted to have in their lives as their friends.

LeBlanc 'Got it covered' in this amusing commercial for a ketchup brand. Those dimples and the charm were perhaps the sign why 'How doin'?' would become his favourite catchphrase

Matt played Chuck Bender here for one season which could be taken as a hint for what was supposed to happen a few years down the line with the playboy Joey.

Matt was Vincent, one of Kelly's boyfriends in a recurring role on the show. He was later part of its spin-off as well called Top Of The Heap (1991) and Vinnie & Bobby (1992) Matt LeBlanc Birthday Special: Lesser Known Facts About Everyone’s Favourite Joey Tribbiani We Bet You Didn’t Know

Bon Jovi's Miracle and Say It Isn't So

Actors appearing in music videos before becoming famous is a common trend and Matt LeBlanc was part of it too. Bon Jovi's "Miracle" and "Say it Isn't So" had him doing what he does best - leave us charmed.

LeBlanc plays snooker...Chandler would be proud! But of course, this was much before Joey became a player...

Tom Petty And The Heartbreakers - Into The Great Wide Open

Kindly wait till the end for the Matt LeBlance scowl...ah yea! The famous one! Things one does before the breakthrough...this would be Joey's version!

Now you know, why Joey was always the charmer on FRIENDS.

(The above story first appeared on LatestLY on Jul 25, 2021 09:10 AM IST. For more news and updates on politics, world, sports, entertainment and lifestyle, log on to our website latestly.com).