Nagaland Assembly Elections 2018: 75 Per Cent Voter Turnout Recorded, Down From 90 Per Cent in 2013 Polls

When voting ended at 4 pm, voters were seen standing in queues outside polling stations, indicating that the poll percentage will go up. 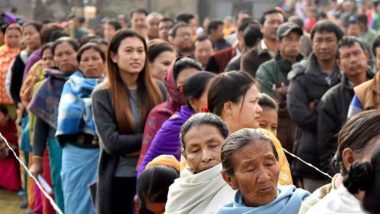 New Delhi, Feb 27: Seventy-five percent of the 11 lakh voters in Nagaland today came out to cast their vote in the assembly elections, the Election Commission said here. When voting ended at 4 pm, voters were seen standing in queues outside polling stations, indicating that the poll percentage will go up. According to rules, those in queues are allowed to cast their votes.

In the last assembly elections, the voting percentage was recorded at a remarkable 90 percent, Deputy Election Commissioner Sudip Jain told reporters here. A total of 11,76,432 voters -- 5,97,281 men, 5,79,151 women and 5,884 service voters -- were eligible to exercise their franchise in the Nagaland polls.

Earlier in the day, violence was reported in parts of Nagaland while polling was underway. One person was killed and three others were injured in a clash between ruling NPF and NDPP supporters as voting was underway for the Nagaland Assembly election that recorded 56 per cent turnout till 1 pm today, a top poll official said.

The clash between the supporters of the Naga People's Front (NPF) and the newly-floated Nationalist Democratic Progressive Party (NDPP) took place at 11.10 am in the Akuluto constituency of Zunheboto district, Nagaland's Chief Electoral Officer (CEO) Abhijit Sinha said.