Local police is taking help of CCTV video footage of the murder spot to investigate the case. Sources reveal two men allegedly came on motorbike and fired four rounds at Sawant, leaving him in pool of blood. 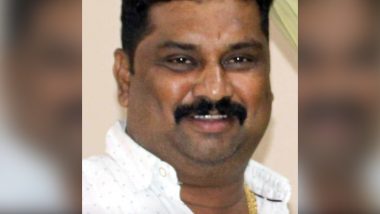 Mumbai, April 23: The Kandivali Shiv Sena Shakha Pramukh Sachin Sawant was shot dead on Sunday evening at Kurar Gokul Nagar area of Malad. Soon after his murder the Kurar police station has registered a case against unidentified people under Indian Penal Code(IPC) section 302 (murder). According to sources, the local police taking help of CCTV video footages of the murder spot to investigate the case. While sources also reveal that two men allegedly came on motorbike and fired four rounds at Sawant, leaving him in pool of blood.

Sawant was taken to a nearby civic run hospital but, was declared dead by doctors on arrival. While it’s been also claimed that Sawant was murdered due to personal clashes. Meanwhile, this is the third such incident reported in recent time. Earlier, in the year 2017, Shiv Sena Leader Sanjay Kotkar 35 years old and Vasant Thube 40 years old — were shot dead in the Kedgaon area of Ahmednagar, followed by another brutal murder of Sena worker, Shailesh Nimse from Bhiwandi taluka. The initial probe into the murder of Nimse, who was set ablaze in Bhiwandi in a bid to prevent his identification, had revealed that there were two masked men seen escorting him to the location where his body was found.

However, the police is yet to identify the masked men. Shiv Sena's Shahapur sub-divisional head Shailesh Nimse before being murdered had gone missing, after he stepped out of his house to attend a phone call. Hours later, his dead body was found in a partially burnt state at Devchola near Digha in Bhiwandi taluka.

While the police have initiated a lookout notice for the two-unidentified accused. The case had been filed against the unidentified persons under section 302 of the IPC.

(The above story first appeared on LatestLY on Apr 23, 2018 11:03 AM IST. For more news and updates on politics, world, sports, entertainment and lifestyle, log on to our website latestly.com).