The intensity of severe cyclonic storms in the North Indian Ocean region has shown an increasing trend in the past four decades, says a recent study by Indian Scientists. 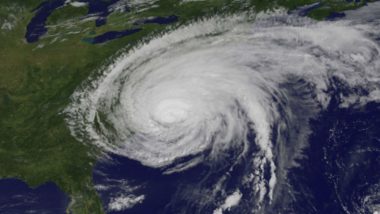 The intensity of severe cyclonic storms in the North Indian Ocean region has shown an increasing trend in the past four decades, says a recent study by Indian Scientists. The increasing intensity of severe cyclonic storms with major socioeconomic implications was due to atmospheric parameters like higher relative humidity, especially at mid atmospheric level, weak vertical wind shear as well as warm sea surface temperature (SST). This indicates the role of global warming in bringing about this increasing trend.

The impact of global warming due to climate change and its effect on extreme weather events such as frequency and high-intensity tropical cyclones formed over global ocean basins is a matter of concern. High-intensity cyclones have become more frequent in the North Indian Ocean, causing significant risk and vulnerability to the coastal regions. Geo-Imaging Satellite ‘EOS-03’ To Launch in Third Quarter of 2021, Will Help in Near-Real Time Monitoring of Natural Disasters Like Floods and Cyclones, Says Minister Dr Jitendra Singh.

A team of scientists including Jiya Albert, Athira Krishnan, and Prasad K. Bhaskaran from the Department of Ocean Engineering & Naval Architecture, IIT Kharagpur, jointly with K. S. Singh, Centre for Disaster Mitigation and Management, VIT University, Vellore, with the support from the Department of Science & Technology, Government of India under the Climate Change Programme (CCP), studied the role and influence of critical atmospheric parameters in large-scale environmental flow and El Niño–Southern Oscillation (ENSO) on tropical cyclone activity in the North Indian Ocean. The research which demonstrated substantial correlation with a measure on the destructive potential of tropical cyclones called Power Dissipation Index was published in the journal ‘Climate Dynamics’, Springer recently. In particular, the tropical cyclones that formed during the pre-monsoon season exhibited an increasing trend. In the recent decade (2000 onwards), the trend was found to be quite substantial in both Bay of Bengal and the Arabian Sea basins.

Investigation of the role of additional parameters such as water vapor and zonal Sea Level Pressure gradients revealed the possible linkage of La Niña years on increased severity of tropical cyclones. The study reported an increased amount of water vapor content in the troposphere, and during the past 38 years at 1.93 times as compared to the base year 1979. During the past two decades (2000-2020), the La Niña years experienced almost double the number of intense cyclones compared to the El Niño years. Besides, during La Niña years, the positional shifts in average cyclogenesis of intense cyclones in Bay of Bengal are analogous with the observations for the western North Pacific Ocean basin. An increasing trend in the climatological distribution of water vapor content was also seen during these years, with peaks localized over the Andaman Sea and North China Sea regions in conjunction with the increased frequency of severe cyclones.

The new findings from this study are expected to augment advanced research in tropical cyclone activity for North Indian Ocean region and also provide the scope for a detailed investigation on the possible linkages and teleconnection with other climate indices over the North Indian Ocean.

(The above story first appeared on LatestLY on Jul 29, 2021 03:03 PM IST. For more news and updates on politics, world, sports, entertainment and lifestyle, log on to our website latestly.com).