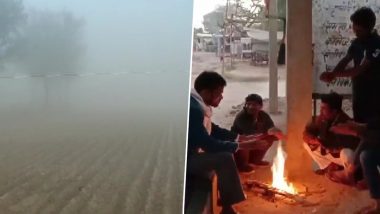 The IMD predicted moderate rainfall over parts of Manipur, Mizoram, Tripura, Tamil Nadu, and Andhra Pradesh and moderate precipitation over Himachal Pradesh and Uttarakhand from January 17 to January 20.  Healthy Winter Fruits: Build Stronger Immunity This Winter Season With These Fruits.

i) Isolated to scattered light/moderate rainfall over Telangana on 16th; over Coastal Andhra Pradesh & Rayalaseema on 16th & 17th January and over Tamilnadu & Kerala & Mahe during next 3 days. pic.twitter.com/kQEc2vB4Hd

(The above story first appeared on LatestLY on Jan 17, 2022 10:16 AM IST. For more news and updates on politics, world, sports, entertainment and lifestyle, log on to our website latestly.com).