Karnataka police personnel have been stationed to stop Hanuman devotees and activists, who are planning to conduct prayers at the Jamia Masjid in Srirangapatna, enroute the historical town on Saturday. 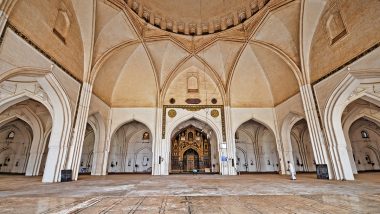 Mandya, June 3: Karnataka police personnel have been stationed to stop Hanuman devotees and activists, who are planning to conduct prayers at the Jamia Masjid in Srirangapatna, enroute the historical town on Saturday.

The district authorities have already issued prohibitory orders with effect from the evening of June 3 till June 5 morning to avoid any untoward incident in the town. Gyanvapi Row: Court and Constitution Will Decide Gyanvapi Mosque Issue, BJP Will Accept, Says JP Nadda

The Vishva Hindu Parishad (VHP) and the Bajrang Dal have given call to all activists to gather in Srirangapatna on Saturday. They plan to enter the Jamia Masjid and conduct prayers there.

This call was given in the backdrop of the district administration not responding to their demand of getting a survey of the mosque done, on the lines of the Gyanvapi mosque in Varanasi.

Sriram Sena founder Pramod Muthalik has also extended support to the 'Srirangapatna Chalo' movement to protest the delay in getting the mosque surveyed.

Sources said the police have informed that they will stop the Hindu devotees and activists from entering Srirangapatna. However, they will be allowed to pray and sing bhajans up to a certain point beyond which they will not be allowed. In case of any resistance, arrests will be made.

Punith, a VHP leader, said that in the wake of the prohibitory orders, they have dropped plans of entering Jamia Masjid.

"We will gather peacefully and sing bhajans. We have sought permission from the district authorities in this regard," he told IANS.

"The authorities will have to come to the spot and clarify when the survey of the mosque will be carried out. Otherwise we will proceed legally," he added.

Jamia Masjid was built by the erstwhile ruler of Mysuru, Tipu Sultan. But Hindu activists claim that the mosque was built after razing a HanMysuman temple.

The mosque, also called the Masjid-i-Ala, is located inside the Srirangapatna fort. It was built in 1786-87 during the rule of Tipu Sultan. The mosque has three inscriptions that mention nine names of Prophet Muhammad.

(The above story first appeared on LatestLY on Jun 03, 2022 09:17 PM IST. For more news and updates on politics, world, sports, entertainment and lifestyle, log on to our website latestly.com).