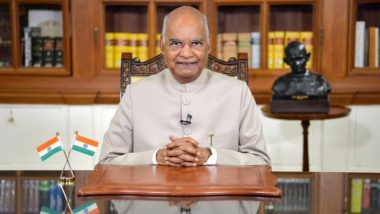 The new law provides for the inclusion of Kashmiri, Dogri and Hindi in the list of official languages in Jammu and Kashmir, in addition to Urdu and English. The Jammu and Kashmir Official Languages Act, 2020, received the assent of the President on September 26, according to a gazette notification. Sikh and Gujjar communities have protested the exclusion of Punjabi and Gojri languages from the bill.

Earlier in the day, the President signed all the three Farm Bills. The bills were passed in Parliament amid protest by the opposition. The Centre has now notified all the bills. Last week, The Farmers Produce Trade and Commerce (Promotion and Facilitation) Bill, 2020, and the Farmers (Empowerment and Protection) Agreement of Price Assurance and Farm Services Bill, 2020 were passed by Rajya Sabha amid protest by the opposition.

(The above story first appeared on LatestLY on Sep 27, 2020 08:32 PM IST. For more news and updates on politics, world, sports, entertainment and lifestyle, log on to our website latestly.com).