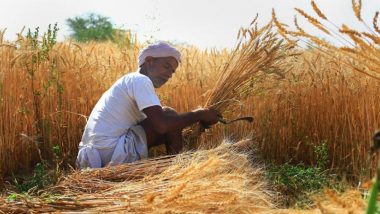 New Delhi, September 27: President Ram Nath Kovind on Sunday signed all the three Farm Bills. The bills were passed in Parliament amid protest by the opposition. The Centre has now notified all the bills. These bills have now become a law. The opposition termed the bill as "anti-farmers". Agricultural Reform Bills: Rajya Sabha Passes 2 Farm Bills Amid Protests by Opposition Leaders And Farmers.

Last week, The Farmers Produce Trade and Commerce (Promotion and Facilitation) Bill, 2020, and the Farmers (Empowerment and Protection) Agreement of Price Assurance and Farm Services Bill, 2020 were passed by Rajya Sabha amid protest by the opposition.

The bills have stirred protests across the country because farmers fear they will no longer get the Minimum Support Price. Opposition parties term these bills as "anti-farmer". They alleged that the agriculture sector would be destroyed. Around 250 farmers' organisations across the country staged a nationwide shutdown on September 25 against Farm Bills which were passed by the Rajya Sabha last week.

The farmers' organisation which participated in the protest, include Bharatiya Kisan Union (BKU), All India Farmers Union (AIFU), All India Kisan Sangharsh Coordination Committee (AIKSCC), All India Kisan Mahasangh (AIKM). States and Punjab and Haryana witnessed a large scale protest by farmers against the bills as maximum of the demonstration atre centres in these two states. Notably, Punjab and Haryana account for over 50 percent of total grain production of India.

(The above story first appeared on LatestLY on Sep 27, 2020 06:35 PM IST. For more news and updates on politics, world, sports, entertainment and lifestyle, log on to our website latestly.com).