Kargil Vijay Diwas: All You Need to Know About the Importance of This Historic Day

July 26 is celebrated every year as Kargil Vijay Diwas across the country to honour the brave soldiers who fought the historical war between India and Pakistan in 1999. 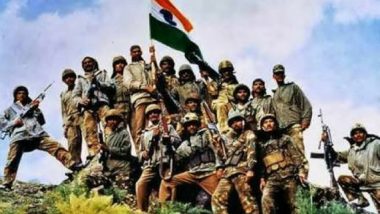 The Kargil was a turning point in the modern Indian history in many ways. It all began in  early May 1999, when India received reports of infiltrators from across the border coming and occupying the Kargil region. The security forces first believed they were Mujahideen who were trying to breach the borders. And initially, the Pakistan Army also denied an involvement. But it didn't take the Indian government too long to realise that it was indeed Pakistan who was the culprit. On realising their involvement, India launched Operation Vijay to drive out the Pakistani troops. The Indian army led by the then Army Chief VP Malik and supported by the Indian Air Force successfully forced the Pakistan Army to retreat post a war that went on till the end of July.

The Kargil War ended on July 26, 1999 and status quo ante bellum (the state existing before the war) was maintained. India declared July 26, 1999, as Kargil Vijay Diwas. The country is celebrating the day and social media users are actively sharing posts about India's historic victory. Here are some interesting facts you must know about the celebration of this historic day:

What is Kargil Vijay Diwas

Kargil Vijay Diwas is named after the success of Operation Vijay.

It is celebrated to mark the conclusion of the war between Indian and Pakistan in 1999.

What was Operation Vijay?

Operation Vijay was launched by the Indian Army to clear off the infiltration by Pakistani soldiers in the Indian side of the LOC and was declared successfully closed on July 26.

The war was fought between India and Pakistan between May and July 1999 and lasted for more than 60 days.

It took place in the Kargil, in the Dras region of Jammu and Kashmir.

The Kargil war was the first war after the war in 1971, which led to the formation of Bangladesh.

Pakistan lost about 3,000 of their men which included both soldiers and militants.

How is it celebrated?

The Prime Minister pays homage to the soldiers at Amar Jawan Jyoti at India Gate in New Delhi every year on this day.

This year on July 25, the elite motorcycle display team of the cops of military police called 'Shwet Ashw', sets off on a motorcycle expedition of more than 3250 km across eight states to mark the event.

The Safed Sagar operation by the IAF was crucial to the Kargil War. For the first time, an air power at the height of 32,000 feet was used by India. It was used to identify Pakistan troops and infiltrators.

The body of Indian martyr Capt Saurabh Kalia was found mutilated in the second week of May, 1999.

The Indian Army also provided proper coffins for martyred Pakistani soldiers and treated them with dignity.

The Kargil War has a special significance in the Indian history. Today the event is being celebrated across the country and the Indian Army marked the day with a series of functions. Several books have been written about the war and it has also found a place in popular culture. Bollywood made two mainstream movies set in the backdrop of the war right after the Kargil War was over -- LOC: Kargil (2003) and Lakshya (2004). The Kargil Vijay Diwas is celebrated every year to honour the soldiers and commemorate India’s historic victory.

(The above story first appeared on LatestLY on Jul 26, 2018 12:11 PM IST. For more news and updates on politics, world, sports, entertainment and lifestyle, log on to our website latestly.com).