July 26 marks the conclusion of the war that lasted for two months against Pakistan which took place in the Kargil-Drass sector of Jammu and Kashmir. 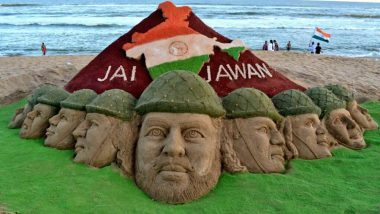 India celebrates Kargil Vijay Diwas every year on July 26 commemorating the country's victory in the 1999 Kargil War against Pakistan. This day we remember the valour and courage of the brave hearts who sacrificed their lives for the nation. July 26 marks the conclusion of the war that lasted for two months against Pakistan which took place in the Kargil-Drass sector of Jammu and Kashmir. Know as Operation Vijay; the war was a tough one that was held in one of the toughest high-altitude battles.

The Indian Army on July 26, 1999, successfully recaptured the position that Pakistani intruders had treacherously occupied. However, the war killed 559 of our brave soldiers and left 1563 injured. Every year, the army organises various functions and events in July in the memory of the slain soldiers. Meanwhile, Twitterati is abuzz with messages paying tribute to the martyrs.

On Kargil Vijay Diwas, I salute the courage and sacrifice of our soldiers who valiantly fought in the Kargil war. Their bravery and love for Bharat Mata continue to inspire us! #KargilVijayDiwas pic.twitter.com/eO4csVYPoy

Humble tributes to our brave soldiers who fought bravely & kept their lives at stake to protect the nation at Kargil War!

Uttarakhand Chief Minister Trivendra Singh Rawat today paid tributes to the soldiers who died in the conflict. On the eve of the Kargil Vijay Diwas, Rawat said, "Showing exemplary courage in Kargil, Indian soldiers pushed back infiltrators across the borders despite severe odds making the entire world acknowledge their valour."

#KargilVijayDiwas , named after the success of Operation Vijay. On 26 Jul 1999, India successfully took command of the high outposts of Kargil, which had been lost to Pakistani intruders. Kargil Vijay Diwas is celebrated on 26 July every year in honour of the Kargil War Heroes. pic.twitter.com/uufWLRu4vZ

#KargilVijayDiwas Tributes to all who made supreme sacrifice for Bharat-Mata during Kargil war! At @RMPONWEB we had then surveyed conditions of families of all martyrs-Shahid Jawans-as a mark of our respect to them!Am glad that working of Sainik Kalyan Boards is now improved!

It is the day to commemorate the sacrifices of those brave hearts of the nation who fought the Kargil War. On #KargilVijayDiwas my humble tribute to their courage and patriotism. pic.twitter.com/X08tqqw5I4

Marking the 19th anniversary of Kargil Diwas, Indian Army's bikers 'Shwet Ashw' have already set off on a 4,300 km expedition and have completed 3250km across eight states.

Saluting the valor & courage of our Armed Forces who fought bravely for the Nation in the Kargil war. pic.twitter.com/MhS9ZVLPg7

This monumental Flag installed at the Kargil War memorial by @FFOIndia reminds us of the supreme sacrifice made by 527 brave martyrs of the Kargil war🙏. pic.twitter.com/U2pxoO3jjD

(The above story first appeared on LatestLY on Jul 26, 2018 09:26 AM IST. For more news and updates on politics, world, sports, entertainment and lifestyle, log on to our website latestly.com).