Marshal of The Air Force Arjan Singh's 3rd Death Anniversary: Here Are Interesting Facts About The Most Decorated Officer of IAF 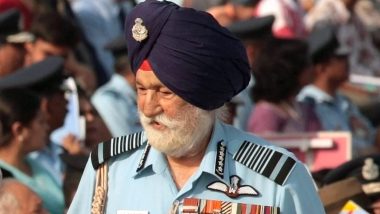 The Indian Air Force observes the third death anniversary of Marshal of the Indian Air Force (IAF) Arjan Singh, Distinguished Flying Cross (DFC). Marshal of the IAF Arjan Singh was born on April 15, 1919, in Lyallpur, Faisalabad which is now part of Pakistan. He died on September 16 in 2017 at the age of 98 years. Sam Manekshaw 105th Birth Anniversary: Remembering Indian Army's 1st Field Marshal With His Memorable Quotes!

He was the first IAF officer who was promoted to the five-star rank of Marshal of the Air Force. Marshal of the IAF Singh was 19 years of age when he was selected for training at Royal Air Force (RAF) Cranwell in 1938. He was commissioned as a pilot officer in December 1939. He played an important role in wars against Pakistan and China. PM Modi Launches Commemorative Stamp to Honour Marshal of IAF Arjan Singh.

Facts About Marshal of The Indian Air Force Arjan Singh:

Arjan Singh flew more than 60 different types of aircraft ranging from Pre World War II-era planes to the supersonic MIG-21. On completion of five years as the Chief of the Air Staff in two ranks, Arjan Singh retired on July 16, 1969. After retiring from the service, he was appointed as India's Ambassador to Switzerland. In 1989, he was made the Lt Governor of Delhi. Marshal of the Air Force Arjan Singh suffered cardiac arrest in September 2017. He breathed his last on September 16, 2017.

(The above story first appeared on LatestLY on Sep 16, 2020 08:00 AM IST. For more news and updates on politics, world, sports, entertainment and lifestyle, log on to our website latestly.com).