The Directorate of Revenue Intelligence (DRI) has seized a consignment of 100 kg of Gold Potassium Cyanide (GPC) worth Rs 32 crore at the Air Cargo Complex here. The consignment was being exported to Dubai by a Mumbai based firm. 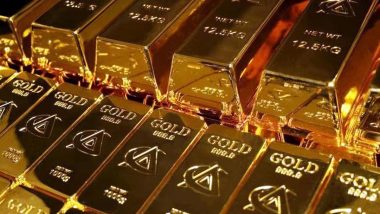 Mumbai, July 12: The Directorate of Revenue Intelligence (DRI) has seized a consignment of 100 kg of Gold Potassium Cyanide (GPC) worth Rs 32 crore at the Air Cargo Complex here. The consignment was being exported to Dubai by a Mumbai based firm.

Based on prior intelligence, the DRI seized the consignment on Sunday after they received inputs regarding export of huge amount of GPC to a Dubai based entity which is closely linked to the exporting firm at Mumbai. GPC is also known as Potassium Dicyanoaurate and its primary application is in the electrolytic gold plating of metals.  Manipur: Gold Biscuits Worth Rs 20.95 Crore Seized From Car in Imphal, 2 Held

The GPC, attempted to be exported, was falsely declared to be the resultant product made from the duty-free import of gold that the Mumbai based firm was permitted to bring in as an input against an Advance Authorisation (AA) license.

"The Advance Authorisation Scheme is duty exemption Scheme, available under Chapter 4 of the Foreign Trade Policy (FTP) 2015-2020, where a manufacturer exporter or merchant exporter tied to supporting manufacturer can bring in duty free import of goods as inputs which are to be physically incorporated in export product," mentions a DRI statement.

The Mumbai based exporter never manufactured any export products out of the duty-free inputs that it was permitted to import, said the statement, adding "Instead, it diverted the imported duty-free gold to the domestic market at a profit, by melting and recasting it."

"This effectively, leads to the violation of the 'actual user condition' imposed under the Advance Authorisation Scheme."

"The connected firm at Gandhinagar was otherwise in the business of Solar Power Energy Solutions, an EPC Company. The Gandhinagar firm, had imported this GPC, in the previous week from Indonesia by claiming benefits of the zero per cent duty concessions available under the ASEAN India Free Trade Agreement (AIFTA)."

Documentary and other evidences collected so far indicate that the GPC which was exported to Dubai, was moved again to Indonesia to be supplied back to Mumbai company through its linked concern at Gandhinagar, thereby demonstrating and establishing a deliberate and illicit cyclical sequence of supply of the same goods, it said.

The estimated duty evasion is Rs 338 crore, said the statement, adding two individuals, who were instrumental in controlling and operating this illicit scheme, were arrested on July 10 this year and have been sent to judicial custody till July 21.

"The matter is being further investigated."

(The above story first appeared on LatestLY on Jul 12, 2021 01:44 PM IST. For more news and updates on politics, world, sports, entertainment and lifestyle, log on to our website latestly.com).