Guwahati Zonal Unit of the DRI carried out the operation in which one vehicle was also seized, according to an official statement. 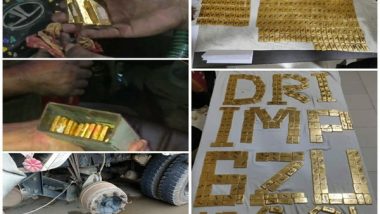 New Delhi, June 17: Two persons were arrested in Imphal with 43.12 kg of gold worth Rs 20.95 crore in a major operation by the Directorate of Revenue Intelligence (DRI) against an organised smuggling syndicate. Guwahati Zonal Unit of the DRI carried out the operation in which one vehicle was also seized, according to an official statement.

Acting on the basis of specific information received, one vehicle along with two occupants were intercepted by the officers of DRI Imphal Unit in the early hours of Wednesday after mounting a prolonged surveillance near Imphal city. Gold and Foreign Origin Cigarettes Worth Rs 1.10 Crore Seized from Woman Passenger at Mangaluru International Airport.

The Directorate of Revenue Intelligence seized 43.12 kgs of smuggled gold valued at Rs 20.95 crores on 16th June at Imphal, Manipur. Two persons have been arrested and one vehicle has been seized. pic.twitter.com/2m81s563x5

Thorough rummaging of the intercepted vehicle which carried on for over 18 hours resulted in the recovery of 260 pieces of gold biscuits weighing 43.12 Kgs valued at Rs. 20.95 crore, the DRI said. "The foreign origin gold biscuits were carefully concealed in three different and specially built secret cavities particularly meant to smuggle such high value goods. The detection of these secret cavities skilfully embedded in the vehicle's interiors indicates their usage for trafficking high-value contraband in the past as well," an official statement said.

In the last three months, Guwahati Zonal Unit of DRI has seized 66.97 kg of gold valued at Rs 32.94 crore originating from the highly sensitive Manipur sector of the Indo-Myanmar border, of which 55.02 kg valued at around Rs 27 crore was seized in the month of June alone.