In a shocking incident, a patient undergoing treatment in the ICU of a BMC hospital was reportedly bit by a rat on his cheek, sparking off protests, here on Wednesday. 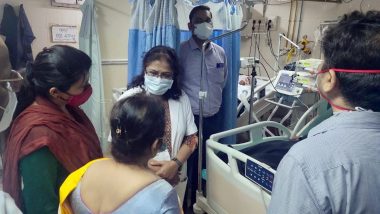 Mumbai, June 23: In a shocking incident, a patient undergoing treatment in the ICU of a BMC hospital was reportedly bit by a rat on his cheek, sparking off protests, here on Wednesday.

The patient, Shrinivas Yellappa, 24, was admitted for liver complications three days ago and was on ventilator in the ICU of the Rajawadi Hospital, Ghatkopar.  MP Shocker: Injured Man Set on Fire in Hospital, Attacker Arrested After Video Surfaces

Yesterday, (Tuesday), his sister saw a bandage below his left eye and created ruckus when informed that a rat was suspected to have nibbled the patient on the cheek.

Later, doctors and civic authorities claimed that the rat-bite was not serious and would heal soon, but the patient's family was not convinced.

Mayor Kishori Pednekar suspected that since the ICU is on the ground floor, the rat may have sneaked in unnoticed when the door was opened by one of the staffers.

The Mumbai Aam Aadmi Party (AAP) has slammed the BMC for failing to protect patients from such happenings and demanded a thorough probe into the matter.

Criticising the Mayor for her statement, AAP Mumbai chief Ruben Mascarenhas asked whether this is the 'Mumbai Model' as hospitals are under attack by rats.

Hoping to drive home the point, the AAP has organized an 'Undir Protest' (Rat Protest) in which its activists will dress up like rats and present mouse-traps to the BMC, this afternoon.

(The above story first appeared on LatestLY on Jun 23, 2021 02:20 PM IST. For more news and updates on politics, world, sports, entertainment and lifestyle, log on to our website latestly.com).