A man in Madhya Pradesh was arrested after a video of him setting another person on fire inside a hospital surfaced. 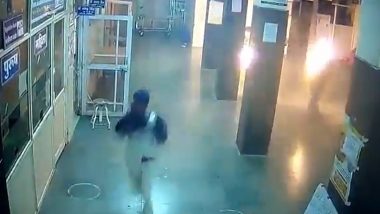 Bhopal, June 12: A man in Madhya Pradesh was arrested after a video of him setting another person on fire inside a hospital surfaced. The incident, which was caught on a CCTV camera, took place at the district hospital at Sagar on June 10. Before he was set on fire, the victim, Damodar Kori, had a fight with the accused man, identified as Milan Mache Rajak. Madhya Pradesh: Dalit Man, His Brother Thrashed, House Set on Fire For Refusing to Withdraw Police Case.

Kori was injured in a fight with Rajak and visited the district hospital to treat his wounds, reports said. Rajak followed Kori to the hospital and set him on fire there. The video of the incident shows Rajak entering the hospital building. He looks around and then goes to a corner where he lights a fire. He then walks towards Kori and set him ablaze. Madhya Pradesh Horror: Stalker Kills 21-Year-Old Girl on Moving Express Train, Jumps off the Coach After Stabbing Her to Death.

Kori is seen running towards the exit, covered in flames. The video also shows Rajak leaving the building. Speaking to a news channel, Vikram Kushwah, Additional Superintendent of Police (ASP) of Sagar district, said the CCTV footage and Kori's statement confirm that Rajak committed the crime. Hence, he was arrested.

Police registered a case against Rajak at Gopalganj police station. He has been booked for attempt to murder under Section 307 of Indian Penal Code.  Kori being treated for the burns at the Bundelkhand Medical College. His condition is reported to be stable. Cops were questioning Rajak and collecting more evidence.

(The above story first appeared on LatestLY on Jun 12, 2021 11:34 AM IST. For more news and updates on politics, world, sports, entertainment and lifestyle, log on to our website latestly.com).