Mumbai Monsoon Forcast 2018: IMD Predicts City to Get First Showers of this Rainy Season after Saturday

Saturday rains in Mumbai will be the official beginning of monsoons as per IMD. 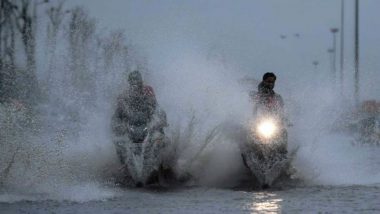 Mumbai, June 8: The Indian Meteorological Department (IMD) stated that southwest monsoon has touched Maharashtra's Konkan, Ratnagiri, Solapur and Nanded regions on Friday morning and will reach Mumbai on Saturday, marking the official beginning of monsoons. The weather forecast agency has predicted heavy rainfall in the city over the weekend. Reportedly, the Brihanmumbai Municipal Corporation (BMC) has cancelled the holidays of all civic officials in the wake of assisting people during the emergency situation if any. The civic body also believes if IMD forecast turns true, the city might probably experience the same deluge-like situation which it witnessed in the year 2005.

The IMD announced monsoon arrival in Maharashtra on Friday at 11:30 am, as the rains which were earlier witnessed by the region are only pre-monsoon showers. The actual monsoon showers are expected to lash Mumbai city on Saturday as per IMD. Ajay Kumar, scientist, IMD, Mumbai was quoted as saying,“The monsoon line is now over the central Arabian sea, and is passing over Ratnagiri, Solapur, Nanded, Adilabad, Kalingpatanam and so on.”

He further added, “We expect rainfall activity over Mumbai to increase substantially over the next 24 hours, from Friday, allowing the setting in of the southwest monsoon."

Meanwhile, the IMD has also issued an advisory to the fishermen not to venture into the sea between June 9 to 11 and also warned others to avoid water rides during this period.

As a precautionary measure, the BMC has also roped in  the navy. Moreover, to assist people from any untoward situation, the Maharashtra state has started a helpline number 1077 and BMC has issued helpline number 1916. The Mumbai civic authority also asked the workers to wear reflective jackets at flooding spots especially so people can identify them and get their help if needed.

(The above story first appeared on LatestLY on Jun 08, 2018 07:19 PM IST. For more news and updates on politics, world, sports, entertainment and lifestyle, log on to our website latestly.com).