Air India Issues Circular to Staff, Warns ‘Sexual Harassment Against Women Would Not Be Tolerated’ 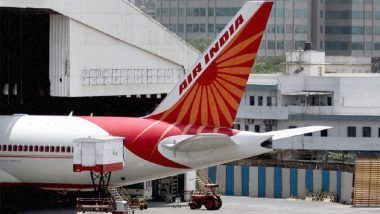 New Delhi, May 17: National carrier Air India on Thursday evening issued a circular to employees terming that sexual harassment against women would not be tolerated at the workplace. The "zero tolerance" comes warning after an Air Indian woman pilot levelled sexual harassment charges against her colleague, commander, who allegedly asked her about sexual relations with her husband. Air India Chairman Terms Sexual Harassment Cases as 'shameful', Seeks Strict Action Against Offenders.

The alleged episode took place on May 5 when both the pilots had gone to Hyderabad for training purposes. On May 6, the woman pilot had submitted a written complaint to the national carrier's management. The airline has ordered a probe into the matter. Air India to Probe Sexual Harassment Charges Against Senior Captain, Sets Up Inquiry Panel on Woman Pilot's Complaint.

AI ED (Operations) captain RS Sandhu issued a circular. “In the recent past, a shameful sexual harassment case has come to light, which is not acceptable and will not be tolerated. AI is committed to working environments that respect the inherent dignity of all persons, affording them the opportunity to reach their fullest potential and empowering them to deliver the best possible results for all the people that Air India serves,” the circular said.

“Every person has the right to be treated with dignity and respect, and to work in safe environments free from harassment, abuse, and discrimination. Every AI employee also has a corresponding responsibility to actively promote such an environment,” circular added. Air India Air Hostess Sexually Abused, Harassed & Discriminated by Senior AI Official, Shares Complaint Letter to Suresh Prabhu.

(The above story first appeared on LatestLY on May 17, 2019 10:16 AM IST. For more news and updates on politics, world, sports, entertainment and lifestyle, log on to our website latestly.com).