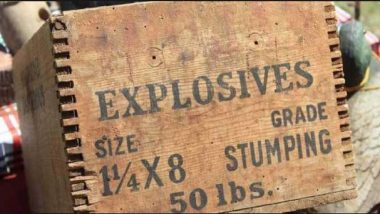 He said that as per the plans, 10 containers will be sent out daily in order to avoid bunching and increasing the risk enroute. A consignment of 740 tonnes of ammonium nitrate in 37 containers was imported by the Amman Chemicals in 2015 as fertiliser from Korea. Beirut Blast: What Is Ammonium Nitrate & How Did It Cause The Massive Non-Nuclear Explosion?

However, as the importer did not have the necessary licence, the Customs Department confiscated the entire consignment and had it stored in Sattva CFS, Manali, here.

It may be recalled that 2,700 tonnes of ammonium nitrate stored at the Beirut port in Lebanon exploded on Tuesday, killing 135 persons and injuring thousands.

Following that concerns were raised about the safety risk of storing 740 tonnes of ammonium nitrate at the CFS. The Customs had auctioned off the ammonium nitrate. The successful bidder, it is learnt, was Salvo Explosive and Chemical, Hyderabad.

(The above story first appeared on LatestLY on Aug 09, 2020 07:28 PM IST. For more news and updates on politics, world, sports, entertainment and lifestyle, log on to our website latestly.com).