The Ananda Vihar-Bhuvaneshwar Sampark Kranti Express ran backward to its previous station to save a woman and her newborn. En route to Bhubaneshwar from Tata Nagar, the train ran back 2.5 km. 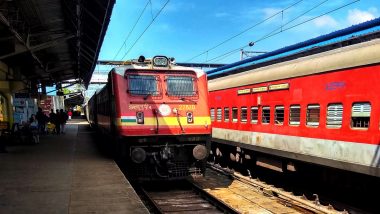 Ranchi, October 27: The Ananda Vihar-Bhuvaneshwar Sampark Kranti Express ran backward to its previous station to save a woman and her newborn. The train, en route to Bhubaneshwar from Tata Nagar, ran back 2.5 km where a medical team from Railways rushed the duo to Sadar Hospital in Khasmahal.

The woman, identified as Ranu Das, who was traveling in Coach number 5 and was on the way to Odisha's Jaleswar, delivered a baby girl, a railway official said. Indian Railways Delhi TTE Helps Woman Deliver Baby on Train, Ministry of Railways Praises His Kind Act.

The information was given to Tata Nagar Railway station and a decision was taken to run the train in the reverse direction as the next stop, Hijli, was too far and it could have proved detrimental to the health of Ranu and her newborn.

(The above story first appeared on LatestLY on Oct 27, 2021 06:31 PM IST. For more news and updates on politics, world, sports, entertainment and lifestyle, log on to our website latestly.com).