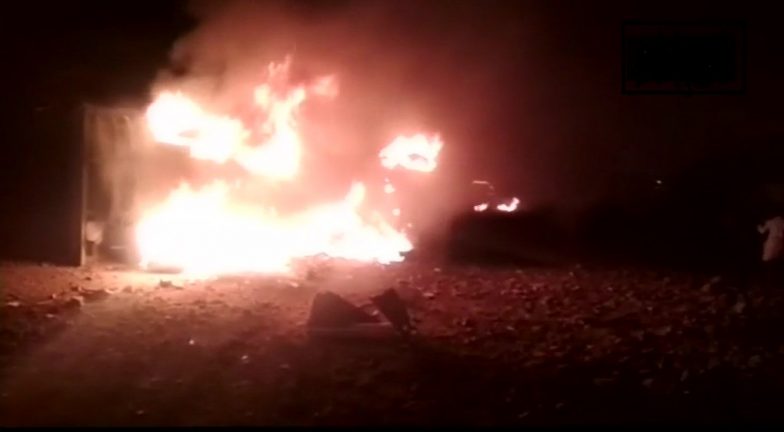 The blast was caused due to gelatin sticks, which are used for exploding granites | (Photo Credits: ANI)

New Delhi, Aug 3: A dynamite blast at a stone quarry in Kurnool district of Andhra Pradesh on Friday has claimed nine lives so far. The death toll is feared to rise as six other workers were left with injuries. They are currently being treated.

Superintendent of Police Gopinath said the explosion took place late in the evening in Haith Belgal village of Alur Mandal in Kurnool district. The cause of blast, based on the preliminary probe, was found to be the use of gelatine sticks.

At least 15 workers were present at the spot when the blast was reported, the police official said, adding that 5 dead bodies were recovered from the spot, whereas, six others left injured were rushed to the hospital. "We trying to locate the remaining four remaining bodies," he said.

The nine deceased were migrant workers, officials said, adding that they were mostly from Bihar and Punjab.

Senior Telugu Desam Party leader and State IT Minister Nara Lokesh expressed grief over the fata incident. Lokesh said the government is monitoring the situation and will extend all help possible.

"Deeply saddened by the news of quarry blast in Hathi Belgal, Alur in Kurnool district which has claimed many lives. We’re monitoring the situation," he said.