A family has alleged that the Delhi Police forced their pet dog to fight a Pitbull which resulted in the death of their pet. Metropolitan magistrate Rohini has reportedly ordered an inquiry in the matter. 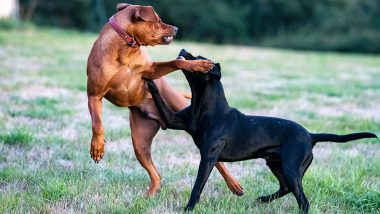 New Delhi, December 15: The family members of an accused in a robbery case have alleged that their pet dog died as the Delhi Police forced their pet to fight a Pitbull inside their house. They have released a video of the incident which was recorded by one of the family members. The incident occurred in the Begampur area of Delhi's Rohini. According to report, Metropolitan magistrate Rohini has ordered an inquiry in the matter by the Joint Police Commissioner of Northern Range. Animal Cruelty: Dog Thrashed to Death with Sticks in Delhi; Two Men Booked.

The police reportedly went to arrest a person accused in a robbery case when they allegedly forced the family's pet dog to fight with a Pitbull which lead to the death of the pet. According to a report by India Today, in the video released by the family, the police officers can be seen cheering and clapping while the dogs fight and the family members can be seen requesting the police to stop the fight. What Do You If You Witness Animal Cruelty? Steps to Take if You Encounter Animal Abuse.

Their pet dog died as a result of the fight with the Pitbull allegedly forced by the Delhi police. The family of the accused, who was arrested by the police in robbery case, has also reportedly alleged that he was thrashed by the police in custody and received injury in his back and arm. Meanwhile, an injury has been reportedly ordered in the matter.

(The above story first appeared on LatestLY on Dec 15, 2021 11:09 AM IST. For more news and updates on politics, world, sports, entertainment and lifestyle, log on to our website latestly.com).