The Uttar Pradesh government has directed school students across the state to wear full sleeve shirts and trousers in view of the rise in dengue and chikungunya cases. 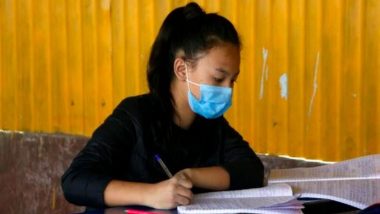 Lucknow, Nov 14: The Uttar Pradesh government has directed school students across the state to wear full sleeve shirts and trousers in view of the rise in dengue and chikungunya cases.

The secondary education department has issued guidelines in this regard to all district inspectors of schools regarding the measures to be taken to protect students from communicable diseases. UP Shocker: 3-Year-Old Falls off Overcrowded Delhi-Bihar Train, Father Jumps To Save Her; Both Killed.

Secondary education director Mahendra Dev has said it is necessary that students and parents are made aware through schools so that students can be saved from these diseases.

"Students should be directed to come to school in full shirt and trousers. Children should be compulsorily informed about communicable diseases and the problems arising out of them in daily prayer meeting," he added.

"Public awareness rallies should also be taken out in villages. Regular cleaning of open water tanks on the premises should be done. It should be ensured that there is no water-logging anywhere in the school premises and neighbourhood. UP CM Yogi Adityanath Orders Officials to Increase Surveillance to Control Spread of Dengue Cases.

If any child has developed symptoms like fever, they should be treated immediately. For this, the cooperation of the primary health centre should be sought immediately, he added.

In a review meeting, Chief Minister Yogi Adityanath said cases of dengue and other infectious diseases had gone up in the past few weeks.

Among the new cases, Chandar Nagar and Indira Nagar areas reported four each, followed by three each in Aishbagh, Chinhat, Tudiyaganj, NK Road, and Aliganj.

As per official data, 1,369 units of platelets are available in the blood banks. Besides, 248 beds are kept reserved for dengue patients at hospitals.

(The above story first appeared on LatestLY on Nov 14, 2022 09:17 AM IST. For more news and updates on politics, world, sports, entertainment and lifestyle, log on to our website latestly.com).