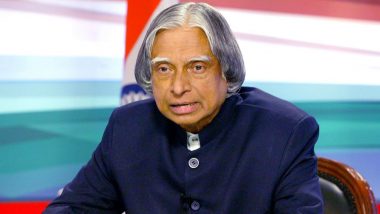 New Delhi, July 27: Today is the fifth death anniversary of former President of India APJ Abdul Kalam. On this occasion, political leaders have paid their tribute to the 'Missile man' for his contributions towards the developments of India's missile projects. Kalam inspired millions through his philosophy of 'simple living and high thinking.'

Dr APJ Kalam, born on October 15, 1931, in Tamil Nadu's Rameswaram. 'Missile Man of India' served as the 11th President of India between 2002 and 2007.  He played a crucial role in the 1998 Pokhran-II nuclear tests. Kalam was also associated with India's space program and missile development program. Political leaders, including parties, took to Twitter to pay tribute to the Missile Man. APJ Abdul Kalam's 5th Death Anniversary: Inspirational Quotes by The Missile Man of India That Continue To Motivate Students Aiming to Build a Better Future!.

Tributes to Dr APJ Abdul Kalam, an epitome of intellect, wisdom and simplicity. A People’s President, who left indelible marks on several fields ranging from science to politics. His relentless quest for knowledge continues to inspire and capture the idea of self-reliant India. pic.twitter.com/YS8p8FjYxE

My tribute to the former President of India, great teacher and eminent scientist "Bharat Ratna"

We pay our heartfelt tribute to the 'Missile Man of India' and our Former President Dr. A. P. J. Abdul Kalam. His spirit of inquiry and humbleness inspires millions of Indians in their quest for knowledge and truth even today. pic.twitter.com/3K5yCNFxPt

He died due to a cardiac arrest while delivering a lecture at the Indian Institute of Management (IIM) in Shillong on July 27, 2015.

(The above story first appeared on LatestLY on Jul 27, 2020 09:44 AM IST. For more news and updates on politics, world, sports, entertainment and lifestyle, log on to our website latestly.com).