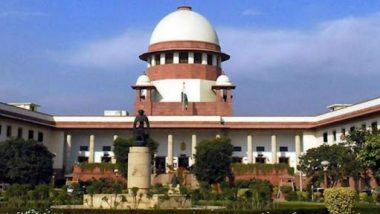 New Delhi, January 25: The Supreme Court on Tuesday issued notice to Centre and the Election Commission on a PIL against the promise or distribution of irrational freebies from public funds before polls, as it shakes the roots of a free and fair election, and vitiates the purity of the election process.

A bench headed by Chief Justice N.V. Ramana after hearing arguments in the matter sought response from the Centre and the Election Commission. Senior advocate Vikas Singh represented the petitioner advocate Ashwini Upadhyay. The plea sought a direction from the top court to declare that the promise of irrational freebies, which are not for public purposes, from public funds before election, violates Articles 14, 162, 266(3), and 282 of the Constitution.

The plea contended that political parties' promises to lure voters in their favour is analogous to bribery and undue influences. The plea cited Aam Aadmi Party promised Rs 1,000 per month to every woman aged 18 and above, and Shriomani Akali Dal (SAD) promised Rs 2,000 to each woman to lure them, and the Congress also promised Rs 2,000 per month and 8 gas cylinders per year to every housewife. Assembly Elections 2022: Supreme Court Issues Notice to Centre and Election Commission of India to Deregister Political Parties Promising Freebies from Public Funds.

The plea submitted that the fulcrum of democracy is the electoral process and if the integrity of the electoral process is compromised then the notion of representation becomes vacuous. "Distribution of money and promise of freebies has reached alarming levels with elections countermanded several times. In this scenario, the danger to the system of parliamentary democracy and Indian republic cannot be gainsaid," added the plea.

The plea claimed, "In fact, after debt repayment, Punjab government is not able to pay even salaries-pensions, then how will it provide freebies? The bitter truth is that Punjab's debt is increasing every subsequent year. State's outstanding debt has increased to Rs 77,000 crore, with Rs 30,000 crore accumulating in the present financial year itself".

(The above story first appeared on LatestLY on Jan 25, 2022 12:26 PM IST. For more news and updates on politics, world, sports, entertainment and lifestyle, log on to our website latestly.com).