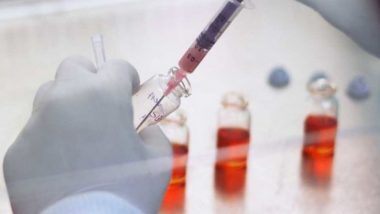 New Delhi, December 2: The third phase human trials of Bharat Biotech's COVID-19 vaccine candidate started in West Bengal and Karnataka on Wednesday. In West Bengal, Governor Jagdeep Dhankar inaugurated the trials which will be conducted at the Indian Council of Medical Research- National Institute of Cholera & Enteric Diseases (ICMR-NICED) in Kolkata. The vaccine will be administered to 1,000 volunteers in Kolkata. Dr Shanta Dutta, Scitentist G and Director ICMR-NICED, Kolkata told the news agency ANI, "Based on the satisfactory result of the first two trials, this has been planned. We're one centre of the 24 centres across India. COVID-19 Vaccine Update: Phase-3 Trial of Bharat Biotech's Covaxin Begins at Sola Civil Hospital in Ahmedabad.

Dutta said, "Total 25,800 volunteers will be given the vaccine dose in phase 3, with 1,000 volunteers here. " She explained the procedure to be followed in trials, adding "It is a two dose vaccination which will be administered 28 days apart. After the second dose, the volunteer will be followed up with for one year. Then an analysis of the protective efficacy of the vaccine will be done & further action taken." COVID-19 Vaccine Covaxin's Phase-3 Trials to Start in Sola Civil Hospital in Ahmedabad, Says Gujarat Deputy CM Nitin Patel.

In Karnataka, CM BS Yediyurappa inaugurated the third phase trials of Covaxin, which will be conducted at the Vydehi Institute of Medical Sciences and Research Centre in Bengaluru. "I think they're doing clinical trial on about 1600-1800 people in Karnataka. CM has officially announced & given first dose today through Vydehi institution. I hope 3rd phase will be very successful & will be devoid of adverse effects on any individual," said K Sudhakar Health Minister Karnataka.

The phase-3 trials of Covaxin are already being undertaken in several states across India, including Gujarat and Haryana. A dose of 0.5 ml would be given on day 0 and on day 28 to the volunteers as a part of the trial application. The phase-three randomised double-blind placebo-controlled multi-centre trial would cover around 28,500 subjects aged 18 years and above.

Covaxin is being developed by Bharat Biotech in collaboration with the Indian Council of Medical Research (ICMR). The results from its earlier two phases has been mostly successful. The Hyderabad-based firm, while applying for phase-three trial, had stated that the vaccine was well-tolerated in all dose groups and no serious adverse events have been reported.

(The above story first appeared on LatestLY on Dec 02, 2020 02:42 PM IST. For more news and updates on politics, world, sports, entertainment and lifestyle, log on to our website latestly.com).