BJP MP Pragya Singh Thakur has said that people in the two villages that she has adopted were forced to sell their daughters to give bribes to the police. 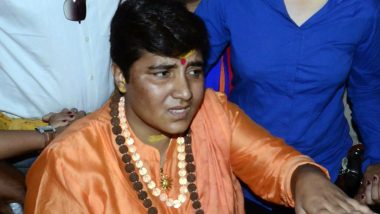 Bhopal, Sep 20: BJP MP Pragya Singh Thakur has said that people in the two villages that she has adopted were forced to sell their daughters to give bribes to the police.

A video of her speech went viral on Tuesday and the Congress was quick to raise questions on the BJP-led Shivraj Singh Chouhan government.

During a programme on Monday, Thakur said that the people in villages, which she has adopted, have no resources to earn for their livelihood. "They (villagers) make desi sharab (country-made liquor) and sell it to earn for their livelihood. Police arrest them and these poor people sell their daughters to pay bribes to police," Thakur was heard saying in a video that went viral on social media. High Commission of India Clears Its Stand on Providing Support to Sri Lanka in Current Economic Difficulties.

The Congress attacked the BJP raising questions on Prime Minister Narendra Modi's 'Beti Padhao-Beti Bachao' scheme. The opposition said that the BJP government was exposed by its own MP, who claimed that "daughters are being sold to pay bribes to the police."

Sangeeta Sharma, a senior Congress spokesperson said, "She (Thakur) has levelled a serious allegation against her own party's government. But, the question is, why did she not raise this issue in the Parliament? She has exposed the BJP government and it proved that the Beti Padhao-Beti Bachao scheme is just a slogan for the BJP." Video: ‘Modi-Modi’ Chants Greet Delhi CM Arvind Kejriwal At Gujarat’s Vadodara Airport.

Pragya Singh Thakur, who is a BJP MP from Bhopal had defeated Congress' Rajya Sabha MP Digvijaya Singh in the last Lok Sabha elections. However, for the last few months, BJP MP has been sidelined by the party.

(The above story first appeared on LatestLY on Sep 20, 2022 04:03 PM IST. For more news and updates on politics, world, sports, entertainment and lifestyle, log on to our website latestly.com).