In her 3-decade long career in the business, Sharma-Menon, 53, launched the first-ever all-women driven services for women, Vira Cabs. 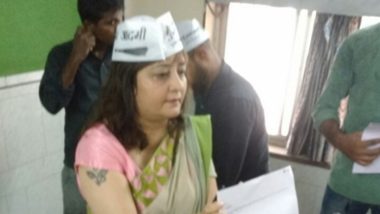 Mumbai, April 30: Ahead of the BrihanMumbai Municipal Corporation (BMC) polls, the Aam Aadmi Party (AAP) on Saturday named its National Executive member Preeti Sharma-Menon, a corporate honcho-turned-politician as the president of Mumbai unit.

In her 3-decade long career in the business, Sharma-Menon, 53, launched the first-ever all-women driven services for women, Vira Cabs.

Born in Chembur, she attended the Loreto Convent School, and later completed her BA in English Literature from the University of Mumbai in 1990.

In 2011, she plunged into the India Against Corruption movement in Mumbai, was the first AAP state Secretary and remained the party's face in Maharashtra for the past nearly a decade.

She has also been active in other social-environmental issues like the Save Aarey Movement, launched the AAP Covid Helpline in the second lockdown and other campaigns.

Sharma-Menon said she humbly accepted the responsibility and thanked AAP National Convenor and Delhi Chief Minister Arvind Kejriwal for giving her the opportunity as Mumbai is her 'janmabhoomi' and 'karmabhoomi'.

AAP Mumbai Working President Ruben Mascarenhas welcomed the announcement saying she always stood for the right and the party would contest all the 236 BMC seats under her leadership.

"The AAP is a beacon of hope and a vehicle for transformative social change. It not just the alternative but the solution. Mumbaikars have long suffered due to mis-governance and neglect. We will leave no stone unturned to bring Kejriwal's model of good governance for Mumbai," assured Sharma-Menon.

(The above story first appeared on LatestLY on Apr 30, 2022 07:48 PM IST. For more news and updates on politics, world, sports, entertainment and lifestyle, log on to our website latestly.com).