"After Independence there were some changes in it but a lot remained,” he said at the inauguration of a three-day meeting organised by the Union Education Ministry with the University Grants Commission and the Banaras Hindu University. 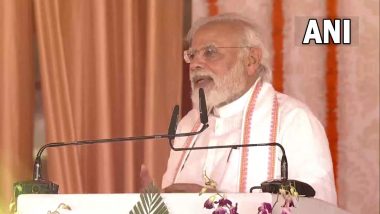 Varanasi, July 7: Prime Minister Narendra Modi on Thursday said the British gave the country an education system to create a “servant class” for meeting their own needs and a lot of it still remained unchanged.

Addressing a summit here on the implementation of the National Education Policy (NEP), Modi said the system should not just produce degree-holders but provide human resources needed to take the country forward. He said the purpose of the education system created in the country was only to provide jobs. “The British provided this education system to prepare a servant class for themselves to meet their needs.”

"After Independence there were some changes in it but a lot remained,” he said at the inauguration of a three-day meeting organised by the Union Education Ministry with the University Grants Commission and the Banaras Hindu University. PM Narendra Modi Says ‘Connect Education With Modern Ideas’.

"We should not just produce degree-holding youths but make our education system such that we create human resources that are needed for the country to take it forward," the PM said. Modi said children now cite Google to counter others. "We should create a system in our campuses that when these students arrive there in the next few years they get what they want," he said.

"We have to delve into the details of the challenges and problems and find solutions. The NEP is opening doors for education in Indian languages. I have confidence that India could emerge as a world education destination,” he said.

The PM said that "innovative thoughts and new ideas" should be discussed at the summit, called the “Akhil Bharatiya Shiksha Samagam”.

The meeting brings together over 300 educationists, including vice-chancellors and directors from public and private universities to discuss the implementation of NEP 2020. Uttar Pradesh Governor Anandiben Patel, Chief Minister Yogi Adityanath and Union Education Minister Dharmendra Pradhan also participated in the summit.