he counting of votes for three Lok Sabha and 30 assembly seats across various states and a union territory is currently underway. The counting of votes began at 8 am on Tuesday. As per the latest trends, the Congress has won in all four bypoll seats in Himachal Pradesh. 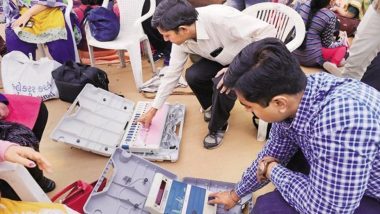 New Delhi, November 2: The counting of votes for three Lok Sabha and 30 assembly seats across various states and a union territory was conducted on Tuesday. The counting of votes began at 8 am in the morning. By the evening, results will be declared. The states where assembly bypolls took place are - Andhra Pradesh, Haryana, Himachal Pradesh, Karnataka, Madhya Pradesh, Maharashtra, Meghalaya, Mizoram, Nagaland, Rajasthan, Telangana. Meanwhile, Lok Sabha by-elections took place UT of Dadra & Nagar Haveli and Daman & Diu, Himachal Pradesh and Madhya Pradesh. The voting was held on October 29.

In West Bengal, The Trinamool Congress won the bypolls to four Assembly seats - Dinhata in Cooch Behar, Gosaba in South 24 Parganas Santipur seat in Nadia and Khardha in North 24 Parganas. In Rajasthan also, the Congress won the Dhariawad and Vallabhnagar assembly constituencies. In Karnataka, the Congress candidate won the Hanagal assembly seat, while the BJP bagged the Sindagi Assembly constituency with a thumping victory.

(The above story first appeared on LatestLY on Nov 02, 2021 05:58 PM IST. For more news and updates on politics, world, sports, entertainment and lifestyle, log on to our website latestly.com).