An 11-year-old boy accidentally hanged himself to death while demonstrating a suicide scene to his elder brother after locking himself up in a room at their house in the Puzhal area in Chennai on Saturday evening. 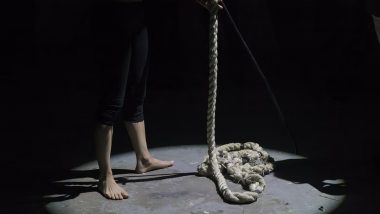 Chennai, September 26: In an unfortunate incident, an 11-year-old boy accidentally hanged himself to death while demonstrating a suicide scene to his elder brother after locking himself up in a room at their house in the Puzhal area in Chennai on Saturday evening. He reportedly slipped from the stool and the noose around his neck tightened which resulted in his death.

The deceased has been identified as J Karthik, a Class VII student of a government school reported TOI.

He lived with his brother Ramsaran  and mother Amudha on the 8th Street in Kamarajar Nagar at Puthagaram near Puzhal in Chennai. Police said Amudha was at the Anna Nagar garments store where she worked when the incident happened. Telangana Shocker: 24-Year-Old Housewife Raped by Unknown Men in Zaheerabad

Ramsaran said to police that they decided to play out a drama in which they would playact a suicide scene where one would hang himself while the other would come to his rescue. Subsequently, Kartik said that he would do the scene that he had watched in several TV dramas and accordingly, locked himself inside a room. His elder brother, Ramsaran stood outside and watched through the window. Uttar Pradesh Shocker: Woman’s Decomposed Body, Stuffed in Sack, Found Near Canal in Shamli

The younger boy had placed himself on a stool and wound a nylon rope around his neck after tying one end to the ceiling. As he was proceeding with the demonstration, his leg slipped and the stool fell down.

Kartik screamed for help. Though Ramsaran, who witnessed the entire incident, tried to break open the door but failed. He then rushed out of the house and called some of their neighbours for help who broke open the door and rushed him to a hospital where doctors declared him brought dead.

(The above story first appeared on LatestLY on Sep 26, 2022 10:32 AM IST. For more news and updates on politics, world, sports, entertainment and lifestyle, log on to our website latestly.com).