Eastern Army commander Lieutenant General Manoj Pande said that there has been an increase in the number of exercises by China's People's Liberation Army (PLA) in the Tibet autonomous region in the last few months as India considers alternate border management. 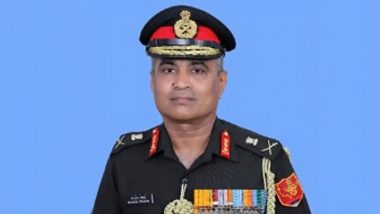 Rupa, Oct 19: Eastern Army commander Lieutenant General Manoj Pande said that there has been an increase in the number of exercises by China's People's Liberation Army (PLA) in the Tibet autonomous region in the last few months as India considers alternate border management.

Speaking to the media at a forward location in Arunachal Pradesh about Chinese activities across the Line of Actual Control (LAC) in the Eastern Sector, Lt Gen Pande said: "So far as the activities on the other side of the LAC is concerned there are three to four issues." Galwan Valley Clash: To Tackle Chinese Army's Barbed Clubs, Tasers, Non Lethal Weapons Like 'Sapper Punch' and 'Trishul' Ready for Indian Security Forces (See Pics).

He said that firstly, annual training exercises carried out by the PLA have increased. "There has been some increase in the activities but in the depth areas," he said.

Secondly, some of the reserve formations of the PLA which were mobilised have continued to remain in their training areas that again is in the operational depth area, the officer said.

Lt Gen Pande pointed out that both sides are attempting to develop infrastructure closer to the line of LAC and which again leads to certain issue at times.

"Since these infrastructure has come up close to the LAC there has also been an marginal increase in number of border defence troops."

Explaining about the recent LAC face-off in the Eastern Sector, he said: "Along this LAC, we have a numbers of areas and number of points where patrols from both side interacts either in a scheduled manner or at times at chance encounter... We also have certain areas of different perceptions here wherein our perception of the LAC is different from what the Chinese perception is and especially in these areas sometimes the patrol comes face to face which then results in a face-off."

The officer added that the force have a robust mechanism, SOP protocols because of which they are able to resolve such situation as and when they arise.

"The role of our commanders and our junior leaders who are actually leading the patrols I believe extremely important in this context because they are the ones who have too develop correct understanding with the commanders on the other sides and then if they are any issues that arise we try and resolve it at the local Commanders level and that has worked out well," Lt Gen Pande said.

The officer said they have a robust conflict resolution management in terms of when required organising meeting between the two sides at different levels.

"We have a mechanism of hot lines, we also meet in what is referred to as border personnel meetings. So far in the Eastern Command we had three hotlines, the fourth one was recently operationalised."

Regarding the Chinese activities, the officer talked about the level of operational preparedness of the force.

"We have taken number of steps number of measures, the foremost is enhancing out surveillance both close to the LAC as well as in the depth areas now this we are doing by synergizing efforts of our all surveillance equipmentA right from the strategic level till the tactical level where our soldiers actually deployed on the LAC," Lt Gen Pande said.

"We have adequateA forces that are available in each sector to deal with any contingency that may arise and we are also practicing and rehearsing on various contingencies that may come about in certain areas where at deployment are thin."

The officer also stated that they have strengthened the deployment, largely in areas where it was thin.

"I would say there has been not major increase or increment in terms of the number of forces that are deployed at the LAC. We also are looking at maximising the potential by incorporating the technologies to the maximum extent possible be it in term of increasing our surveillance, ISR capabilities or in terms of communications and likewise," he pointed.

When asked about the Chinese continuously breaching the laid out agreement and protocols, the officer said it is being looked at on a higher level.

In terms of larger guidance, the officer said that strategic guidance in terms of dealing with situation on the LAC is to respect the mutually agreed protocols and agreements and that has been India's effort, not withstanding what has been the action or response from the other side.

"Consequent to what happened and what we need to do in the future, is something I reckon is being looked atA the larger level," he said.

(The above story first appeared on LatestLY on Oct 19, 2021 01:19 PM IST. For more news and updates on politics, world, sports, entertainment and lifestyle, log on to our website latestly.com).