College Students in Uttar Pradesh to Be Given Tablets With Pre-Loaded Study Material, 160 Tablets to Be Alloted in 7 Districts Soon

The tablets will come with pre-loaded study material and will be distributed to students in 18 government colleges in seven aspirational districts across Uttar Pradesh. The UP government plans to provide eight to nine tablets to the library of each of these colleges. 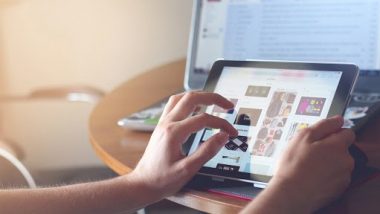 Lucknow, December 23: With an aim to give education a digital push, the  Uttar Pradesh government led by Chief Minister Yogi Adityanath has decided to provide 160 tablets to students in several government colleges. Reports inform that these tablets will come with pre-loaded study material and will be distributed to students in 18 government colleges in seven districts across the state. The Uttar Pradesh government plans to provide eight to nine tablets to the library of each of these colleges.

According to a report by The Indian Express, the tablets will be available at college libraries as digital reference books. The students can also get the tablets issued to refer to the study material. The report quoted Deputy Chief Minister Dinesh Sharma saying that the districts chosen for the initial stage of the project are Fatehpur, Sonbhadra, Chandauli, Shravasti, Siddharthnagar, Balrampur and Chitrakoot. Uttar Pradesh Govt to Install 'Advance' Surveillance Cameras at 720 Locations in Varanasi.

Giving details about the digital initiative for students, Additional Chief Secretary of Higher Education Maneka S Garg said that in the above mentioned districts, majority of students do not have smartphones or other e-learning devices and lack internet connectivity. Each tablet will have 10-inch screen and high resolution. Garg added saying that pre-loaded study material will help the students as it doesn't need internet connectivity.

(The above story first appeared on LatestLY on Dec 22, 2020 11:31 AM IST. For more news and updates on politics, world, sports, entertainment and lifestyle, log on to our website latestly.com).