Coronavirus Cases in India Update: One in Goa, 5 in Haryana Detected With Deadly nCoV-2020, Toll of Suspects Reach 26 in India; Here Are The Details 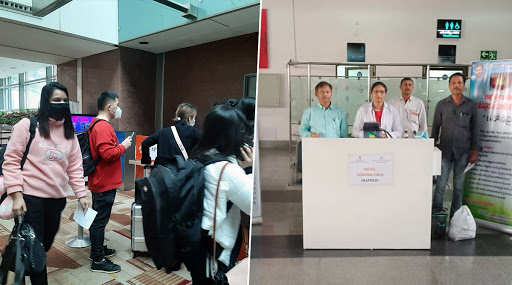 New Delhi, January 28: Following the outbreak of 2020 novel coronavirus (2020-nCoV) in China, and Indian government claiming to find 20 suspects affected with the deadly virus, latest updates are pouring that one European national arriving in Goa and five others in Haryana were found likely to be positive. With this, the number of suspicious cases of coronavirus-affected people in India reached to 26 on Tuesday.

According to two separate reports of Indian Express, an European national -- returned from China, and reached Goa via New Delhi -- became the first 'suspect case' for Goa. He has been admitted in the special corona isolation ward at the Goa Medical College since Tuesday morning, informed state Health Minister Vishwajit Rane. His samples have now been sent to Pune for verification. Coronavirus Scare in India Update: Health Ministry Sets Up Scanners at 13 More Airports, MEA Begins Evacuation Process of Indian Nationals From China, Here Are All The Details.

Apart from this, Haryana state's Director-general of health services Dr Suraj Bhan Kamboj confirmed that they have found five suspected cases of the novel coronavirus. These suspects include two from Gurugram, while the other are from Faridabad, Nuh, and Panipat districts. Dr Suraj said all these suspects have been kept under observation as per Union Health Ministry's directives.

Earlier, reports arrived that Jammu and Kashmir administration held a meeting on Tuesday with the senior officials of Union Territory and ordered screening (at airports) of people arriving from China, Nepal and other countries. In all these countries, confirmed cases of deadly coronavirus were found. Coronavirus Outbreak in China: MEA Begins Evacuation Process, Asks Indian Nationals to Submit Passport Details at Beijing Embassy.

Meanwhile, Indian government on Tuesday announced that screening of passengers with travel history from China has been extended to 13 more airports, taking the total to 20. The Union Ministry, however, informed that no death took place till January 28 in India due to coronavirus. They also said that the Ministry is procuring more thermal scanners for faster screening of nCoV and have asked the NIV Pune to gear up for testing clinical samples.

With the World Health Organisation citing the coronavirus as global potential threat, Union External Affairs Minister S Jaishankar on Tuesday said that they are planning to send a plane to Wuhan in China to evacuate Indians stuck there due to the outbreak of coronavirus. Also, MEA spokesman Raveesh Kumar informed that they have begun the process to prepare for the evacuation of Indian nationals affected by the situation arising out of Corona-2019 virus outbreak in Hubei Province, China. Coronavirus Outbreak: List of Countries that Have Confirmed Cases of SARS-Like Virus.

Directorate General of Civil Aviation (DGCA) had approved Air India flight to Wuhan for the evacuation of Indian citizens from the coronavirus hit Chinese city. It is to be known that till Monday, 155 flights have been screened (total cumulative passengers 33552), informed the MEA. Till now, confirmed cases in China surged to 4,515. WHO’s latest situation report on January 27 claimed that there were roughly 2,800 confirmed cases of the coronavirus infection globally, at least 2,741 of which are in China.