Additionally, two Indian Navy ships and four Indian Navy aircraft were deployed for humanitarian assistance and disaster relief assistance and warn fishermen at the west coast of the sea. As the cyclone crossed over Rameswaram and rainfall ceased, authorities reported damaged boats. 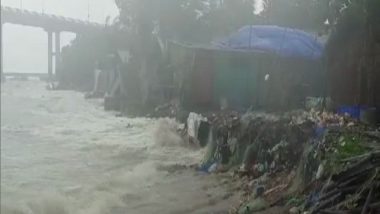 Chennai, December 3: Cyclone Burevi edged further into the Indian peninsula on Thursday afternoon as violent rainfall with strong winds was witnessed in the Kodaikanal area in the Dindigul district. As Burevi crossed the Rameshwaram coast, diving and disaster relief teams from the Indian Navy stood on standby to render necessary support to the administration.

Two fishermen and one fisherwoman from Pamban were rescued after being stranded due to the storm. The wind speed has gradually decreased and it is currently blowing at a speed of 34 kmph. The cyclone is expected to make landfall in Thoothukudi Kanyakumari via Pamban this evening or later in the night.