Total 26 teams of National Disaster Response Force pre-positioned across Tamil Nadu and Kerala, in the wake of Cyclone Burevi. Kerala Chief Minister Pinarayi Vijayan on Wednesday said that the state is on a high alert in view of Cyclone Burevi. 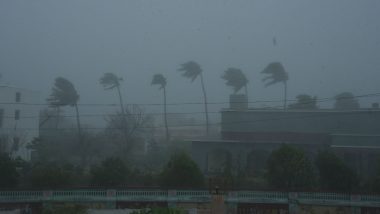 In addition to this, IMD issued a red alert for Thiruvananthapuram, Kollam, Pathanamthitta, and Alappuzha districts for today. Tamil Nadu's Virudhunagar recorded 97.60 millimetres of rainfall since Wednesday night, with Kariapatti receiving maximum rain of 15.80 mm ahead of cyclone Burevi's landfall in the state.

Cyclone Warning for South Tamilnadu and South Kerala coasts:Cyclone Burevi' to emerge into Gulf of Mannar during next 3 https://t.co/83HTlHnJJU reach near Pamban around noon and cross south Tamilnadu coast between Pamban and Kanniyakumari during 3rd night/4th early morning as CS pic.twitter.com/TlSCMzRU4L

(The above story first appeared on LatestLY on Dec 03, 2020 11:00 AM IST. For more news and updates on politics, world, sports, entertainment and lifestyle, log on to our website latestly.com).