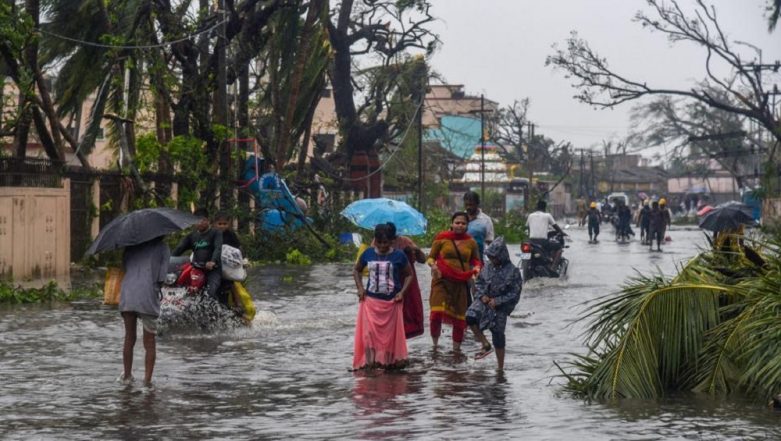 Visuals from May 3, when cyclone made landfall | (Photo Credits: PTI)

Bhubaneswar, May 11: A week after Cyclone Fani battered the state of Odisha leaving 41 dead, the Naveen Patnaik government is still struggling to provide electricity to the devastated regions of the state. Out of power for over a week, the survivors in Jagatsinghpur district have hit the streets to mark their protest.

Residents of Chopada gram panchayat of Jagatsinghpur district blocked the arterial Cuttack-Paradip road in the morning demanding the administration to restore power at the earliest. The authorities have sought more time, claiming that the magnitude of the damages incurred in the cyclone is unprecedented. Cyclone Fani: Dharmendra Pradhan Holds Review Meeting at Bhubaneswar IOCL Headquarter

The power grid in the four districts of Puri, Khurda, Jagatsinghpur and Jajpur was completely devastated, with 5030 kms of 33 KV lines, 38613 kms of 11 KV lines and 79485 km of LT lines being dismantled.

The people of Puri continued to remain in darkness even after seven days of Fani making landfall in the seaside holy town. "We will start restoring power in Puri town from May 12. The other parts of the district will get power from May 15," said Information and Public Relations Secretary Sanjay Singh.

While claiming that power was restored in 80 per cent of Bhubaneswar, Singh said all the electricity consumers here would get power by Sunday. He said except the Jagatpur industrial estate, electricity services were restored in neighbouring Cuttack.

He also claimed that the drinking water supply had been restored in all the cyclone affected areas. Speaking on the impact of Fani on the rural economy, Singh said crop loss had been estimated to be over 1,52 lakh hectares of land spread over 14 cyclone-hit districts.

Crops like coconut, banana, cashew and betel have been severely affected in the coastal districts, he said. The rural economy of Puri, Khurda, Jagatsinghpur, Cuttack and Kendrapara are mostly dependent on the cultivation of these crops.

At least 65 cashew fields of Puri, Khurda, Cuttack and Jajpur have been destroyed by Fani that crossed the coastal region of the state at a wind speed of about 200 kilometre per hour last Friday.

The cyclone has also dealt a blow to the fishing community living in the sea shore. While 6,321 traditional marine fishing boats have been damaged, 7,044 fishing nets, 2,524 fishing ponds, three fishing harbours, six fish landing centres and several buildings were fully or party affected in the cyclone.

The cyclone has so far claimed 41 lives, with Puri district accounting for the maximum 21. A total of 167 people were also injured in the calamity. Of them, 160 were from Puri district, four from Kendrapara and three from Bhubaneswar.

Prime Minister Narendra Modi, during his visit to Odisha on May 6, had announced ex-gratia of Rs 2 lakh for the family of each deceased and Rs 50,000 for each of the injured people.

Meanwhile, official sources said a central team was likely to arrive in the state on May 12 to conduct a thorough assessment of the damage caused to different sectors by Fani.

The Centre has already announced a total financial assistance of Rs 1,341 crore. As electricity and Internet services remained elusive, banking activities were crippled in coastal Odisha for about a week only to resume partial operations on Thursday following the gradual restoration of power.

"Banking service is now operational in some urban pockets of Puri, Bhubaneswar, Cuttack, Jagtsinghpur and Kendrapara. Some bank branches and ATMs are functional with restoration of power and Internet service," said Sanjay Singh.

He said there are at least 2,359 ATMs in the cyclone-hit towns of Puri, Khurda, Bhubaneswar, Cuttack, Jagatsinghpur and Kendrapara. Of them, 596 ATMs have started functioning. Similarly, 928 of the 1,690 bank branches in these towns have been operational by Thursday, he said.

The Reserve Bank of India asked all the operational banks to keep the branches open till 6 pm for the benefit of the people. Singh said the state government has also asked the insurance companies to ensure that the affected people get compensation without much delay.

Union minister Dharmendra Pradhan on Thursday reviewed the post-cyclone restoration of train communication. "Normalcy is returning in Khurda division which was severely hit in the cyclone. Of the 18 pairs of trains running to Puri, 10 have started operating," he said.