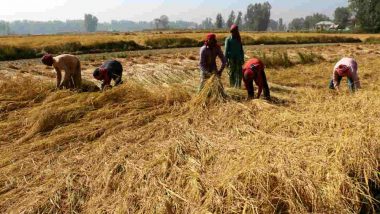 It is estimated that crops were damaged in 169 mandals. Kannababu said that officials have been appointed to assess the crop damage, and assured that farmers will be provided all assistance.

He stated that the officials have been appointed to oversee the final enumeration and the District Collectors have been directed to hold Agri-Advisory Committee meetings to discuss the crop loss. As instructed by the Chief Minister, all the required measures will be taken to rescue the farmers.

He said while the government was working hard in these critical times, the opposition leaders were creating panic among farmers by taking up a malicious campaign against the government.

The minister slammed TDP chief Chandrababu Naidu for "misleading people". He reminded that farmers were abandoned by TDP rulers during their regime but the same rulers are now shedding crocodile tears. "Unlike the previous government, Chief Minister Y.S. Jagan Mohan Reddy had always supported the farmers, introduced market stabilisation fund, and stood by them right from seed to sale," he said.

Kannababu said that the TDP government had procured only 11.22 lakh tonnes of crops in five years at a cost of Rs 3,921 crore but the current government spent Rs 6,454 crore to procure 19.39 lakh tonnes of crops in the last two years. Maharashtra Rains: 10 Dead, Over 200 Cattle Washed Away After Heavy Rainfall Triggers Floods in Marathwada Region.

He said agriculture growth rate declined from 8.31 per cent to 4.75 per cent during the TDP's rule but it increased to 5.52 per cent under the YSRCP rule. Similarly, the growth rate in livestock and fisheries was recorded at 8.84 per cent and 4.66 per cent, respectively, in the five years of the TDP rule while the same under the present regime was 12.51 per cent and 8.59 per cent.

(The above story first appeared on LatestLY on Sep 28, 2021 11:50 PM IST. For more news and updates on politics, world, sports, entertainment and lifestyle, log on to our website latestly.com).