The bouncers of a club in south Delhi allegedly thrashed a woman and tore off her clothes, the police said on Sunday. Woman's friends were also beaten up in the brawl. 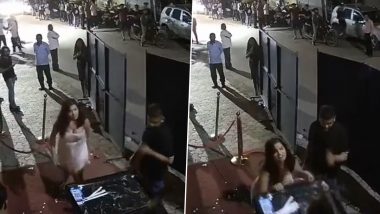 New Delhi, Sep 25: The bouncers of a club in south Delhi allegedly thrashed a woman and tore off her clothes, the police said on Sunday. Woman's friends were also beaten up in the brawl.

However, the club owner denied all charges, accusing Delhi Police personnel of mental and physical harassment apart from being falsely implicated in the case for not paying 'extortion' money.

According to the police, the incident took place on the intervening night of September 17-18. "A PCR call was received at KM Pur police station regarding an incident of misbehaviour and tearing off the clothes of a woman at 'Da Code' club in South Extension after which the police reached the spot and met the caller," Deputy Commissioner of Police Chandan Chowdhary said.

According to the DCP, when the police reached the spot, they found that the woman caller's clothes were messed up and disordered, and on inquiry, she told that her clothes were torn by two bouncers and their manager of the club. "She further informed that she was misbehaved and hit by them, and they had also touched her inappropriately," the DCP said. PFI Encouraged Vulnerable Youth To Join LeT, ISIS, Al-Qaeda, Says NIA Remand Report.

After taking the victim woman to AIIMS Trauma Centre, the police, accordingly, registered an FIR under sections 323 (Punishment for voluntarily causing hurt), 354 A (Sexual harassment and punishment for sexual harassment), 354 B (Assault or use of criminal force to woman with intent to disrobe), 509 (Word, gesture or act intended to insult the modesty of a woman) and 34 (common intention) of the Indian Penal Code and began probing the incident.

The bouncers of a club in south #Delhi allegedly thrashed a woman and tore off her clothes, the police said on Sunday. Woman's friends were also beaten up in the brawl.@DelhiPolice pic.twitter.com/lYBXbqAtE8

The senior official said the complainant was examined in the case, who had informed that she had come to the club along with her friends to party, but they had an argument over entry into the club and were subsequently thrashed by the bouncers. Gurugram Shocker: Unhappy With Her Job, Husband Brutally Stabs Wife; Accused Absconding.

The officer informed that they are investigating the incident and CCTV cameras of the club and other neighbouring showrooms are being analysed. "The details of the bouncers have been taken from the club and efforts are being made to arrest the real culprits," the DCP said.

Chowdhary further informed that the complainant's statement was also recorded before the Concerned Magistrate at Saket Court Complex. Seven days later on September 24, the club, yet again, found itself in controversy as seven of its people were detained after they allegedly tried to stop Delhi Police personnel who went there after a complaint of quarrel and loud music.

"A PCR call was received at KM Pur police station on 12.02 a.m. on September 24 stating that some quarrel has taken place with bouncers of the club and DJ is being played," DCP Chowdhary said.

The senior officer said when the police reached the spot and tried to enter the 'Da Code' club, the bouncers tried to stop them. "Hence, seven persons were detained and action against them was taken under sections 107 and 151 of the Code of Criminal Procedure," the DCP said.

The police also seized an amplifier that was being used to play the music at the bar. Notably, the DCP of the south district also shared a three-year-old old case of the club in which an FIR was registered against five people, including the bar owner and his son, on the complaint of an Excise Department Inspector. Sharing details of that case, the DCP said three years ago in 2019 when the Excise Staff came to conduct a raid in the club, they were assaulted and confined in the bar for several hours by the owner and his staff.

"The Excise Staff was released from the club, when the local police reached there and intervened in the matter. Hence, the club owner, his son and staff were also charge-sheeted in the case," the DCP added. On the other hand, the owner of the club, Surendra Singh Chowdhary, had a complete different story to tell.

In a letter to the Special Commissioner of Police (Law and order), he accused the local police personnel of demanding Rs 5 lakh extortion money every month and when he refused to pay that, he was subsequently threatened by them. On the September 18 incident, the club owner said that around 1 a.m. in the night, four boys and three girls, who were all drunk, misbehaved with the club's staff and when they were told to behave, the girls threatened to implicate us on false charges.

"They forcibly took Rs 1.5 lakh from the podium and then made a call to the police. When the police came, it was the same cop who had been threatening us with extortion and then he yet again threatened us of severe consequences," the club owner wrote in his letter to the Special CP. The owner claimed that the police personnel came the next day on September 18 as well and detained two of their staff members who were explaining to them the previous night's incident.

"We kept requesting the police personnel to investigate with the help of CCTV cameras as our club is completely covered with it and the whole incident has been recorded on it," the club owner said. He said that the police kept his staff members in custody for over 22 hours and thrashed them with belts, sticks and shoes at regular intervals.

The owner claimed that on September 23-24 intervening night, the police, yet again, reached their bar and seized Rs 2,53,000 worth instruments as he refused to pay the extortion money. Responding to the allegations of the club owner, DCP (south), Chowdhary said that further enquiry into the allegations made by the club owner are also being done.

(The above story first appeared on LatestLY on Sep 25, 2022 11:54 AM IST. For more news and updates on politics, world, sports, entertainment and lifestyle, log on to our website latestly.com).