Delhi Chief Minister Arvind Kejriwal on Monday called for an end to the ongoing 'demolition drive' in the national capital, terming it as the biggest destruction since India got Independence. 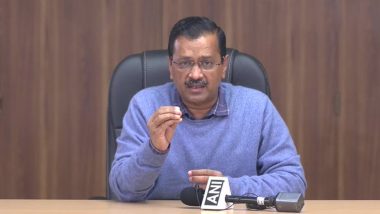 New Delhi, May 16: Delhi Chief Minister Arvind Kejriwal on Monday called for an end to the ongoing 'demolition drive' in the national capital, terming it as the biggest destruction since India got Independence.

"They (Municipal Corporation) are planning to demolish all the unauthorised colonies of Delhi. Over 50 lakh people are residing there. Their planning is that all the slums of Delhi should be demolished. About 10 lakh people live in the slums of Delhi. I am of the opinion that this will be the biggest destruction since India got Independence," the Chief Minister said in a televised address. Delhi: Anti-Encroachment Demolition Drive Underway in Mangolpuri.

He said their government is all also against the encroachment, but this is not the way things are done. "Over 80 per cent of land in Delhi is already encroached. Delhi was not built in a planned way. The MC is planning to bulldoze over 63 lakh people of the city. This is not right," Kejriwal said.

The Delhi CM also questioned the way the BJP-ruled civic agency is demolishing the illegal encroachments across the Capital. "The way the encroachment is being demolished, there is no paper, no process, just bulldozers reach any colony and start breaking people's houses. People are standing in front of the bulldozer carrying original documents of their houses, but none listens to them and their house is encroached," he said.

"Delhi has been ruled by the Municipal Corporation for 15 years. What have they done in 15 years? BJP got illegal buildings constructed during their tenure, they took money and allowed illegal constructions. Now that their term is going to be completed on May 18. Do they have the moral power, do they have the constitutional power to take action to run such a bulldozer?," Kejriwal questioned.

The chief minister promised the people to solve all these problems once they have wrested power from the BJP.

"We will solve these problems. Will make raw colonies clean, give ownership rights to the people living there. We will develop them into good colonies, we are also building houses for the slum dwellers," the CM said.

All the three civic agencies in the national capital have since the past one week, rigorously carried out a demolition drive against illegal encroachments in the city. The Municipal Corporation's hardline approach, vis-a-vis, demolishing illegal-encroachments has at times also faced alleged encroachers outrage.

(The above story first appeared on LatestLY on May 16, 2022 04:14 PM IST. For more news and updates on politics, world, sports, entertainment and lifestyle, log on to our website latestly.com).